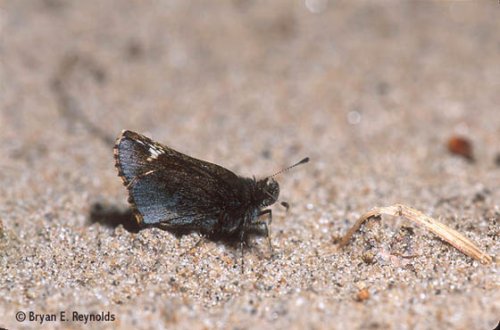 Local and generally uncommon; along roadsides and streamsides in dappled light and shade in moist habitats within forest; very local. Found in the Coast Range/Bay Area and on the Sierran West slope, foothills to (rarely) 7000'. It often co-occurs with the Arctic Skipper, Dreamy Duskywing, Western Tailed Blue, Clodius Parnassian, Gray-Veined White, etc. Males perch on leaves in sunflecks and occasionally visit mud puddles. There is no color or pattern variation, and the sexes are nearly identical.

This is our only member of a large genus whose metropolis is in the desert Southwest and adjacent Mexico. Our species is the most widespread in the genus, occurring all the way from our area to the Atlantic coast states.

There is one brood, flying April to July (later at higher elevations). The host plants are known to be native grasses but no precise identifications have been made in our area.

Adults visit small woodland flowers - vetches, mints, dogbane, etc. They are so inconspicuous that they are often overlooked. One well-known Bay Area collector had never noticed this species despite several decades of field experience! 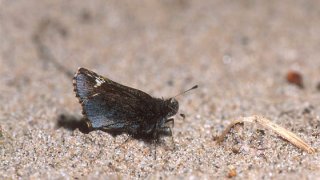