Willow Slough is not part of the transect, but is censused once a year – always on the Fourth of July – as part of the annual 4th of July Butterfly Count started by the Xerces Society and now sponsored by the North American Butterfly Association (NABA). Because the Count, which is modeled on the Audubon Christmas Bird Count, is quite unstandardized, with different numbers of counters, with differing levels of skill in identification, counting on different days (the counting window merely centers on July 4), it is very difficult to use the resulting data in a meaningful way. By doing the Willow Slough count solo, following a rigid protocol and always counting on July 4 (which is fully feasible in a Mediterranean dry-summer climate!), Art has provided the only standardized July 4 count data in the program. Even so, there are severe limitations on what can be extracted from a one-day-a-year data set, and we have had fun exploring them statistically. The list of species is NOT the complete fauna recorded from Willow Slough—only the ones ever recorded on July 4. The fauna broadly overlaps our other Valley floor sites, West and North Sacramento, as well as Suisun. Unlike those sites, it has been Pollard-counted from the beginning.

Most of the sampling route follows the Willow Slough Bypass, a levee-enclosed overflow channel constructed to divert excess water from Willow Slough proper. A nearly permanent stream flows along its southern edge. The remainder of the floodplain is under water intermittently most years, but may be flooded continuously for many weeks at a time in wet years, such as 1982-83 or 2005-06. Major flooding events remodel the channel to some degree and may bring episodes of major siltation. The vegetation is dominated by herbaceous perennials, many of which form large, well-defined patches which enlarge outward by vegetative reproduction. They include Common Tule (Scirpus californicus), Aster (Aster chilensis, which is hypervariable at the site, behaves like a hybrid swarm and is a major butterfly nectar source), the flat-topped Goldenrod Euthamia (formerly Solidago) occidentalis, California Mugwort (Artemisia douglasiana), Perennial Ragweed (Ambrosia psilostachya), Teasel (Dipsacus fullonum), Tall Dogbane (Apocynum cannabinum), Narrow-Leaved Milkweed (Asclepias fascicularis), Sweet Fennel (Foeniculum vulgare), Bird’s-Foot Trefoil (Lotus corniculatus), Alkali Mallow (Malvella leprosa), and numerous others. Conspicuous annuals include Poison Hemlock (Conium maculatum), Bishop’s Weed (Ammi majus), Bull thistle (cirsium vulgare), Milk Thistle (Silybum marianum), Spanish lotus (Lotus purshianus), White Sweet-Clover (Melilotus alba), Indian Sweet-Clover (M. indica), Cocklebur (Xanthium strumarium complex), and many others. In recent years Perennial Peppergrass or Tall White-top (Lepidium latifolium) has aggressively occupied much of the bypass east of Pole Line Road. The bypass west of the road is being invaded by a number of woody plants, including Sandbar Willow (Salix exigua or hindsiana) and other willows, Walnut (Juglans hindsii), and Wild Rose (Rosa californica). The water-management authorities periodically remove woody vegetation, usually by hand.

The adjacent levees bear mostly Mediterranean annual vegetation, especially Wild Oats (Avena fatua) and Milk Thistle, along with the native annual Spanish Lotus. At the east end of the study site on the north levee is a colony of the alkali plant Suaeda fruticosa (S. moquinii), which serves as a perennating host for the Pygmy Blue, Brephidium exile. Farther east on the north levee there are several small patches of Pickleweed (Salicornia). These plants are closely associated with the alkali-tolerant perennial turfgrass Distichlis spicata. Both Suaeda and Distichlis occur on the east leg of the walk, parallel to Pole Line Road. Distchlis occurs on the west leg, parallel to the railroad tracks between Covell Blvd., Davis and Road 29, along with Malvella leprosa and several relict Valley wildflowers including Hemizonia , Blue Dicks (Dichelostemma capitatum), Tidy-Tips (Layia platyglossa), four species of Lupines, Perennial Vetch (Lathyrus jepsonii), California Mustard (Guillenia lasiophylla), and other increasingly scarce species.

The levees are burned sporadically but fire rarely affects the floodplain, with its high water table and high water content of the vegetation. It will be noticed that the genera listed are mostly summer-to-autumn blooming, a sure indicator of a high water table in a Central Valley context. 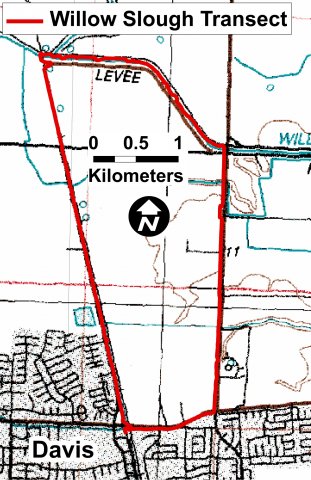