The historic town of Washington, Nevada County, sits at 803m in the deep canyon of the South Yuba River. At the height of the Gold Rush over 2000 people lived here, but now it is a sleepy hamlet with only about 200 residents. Placer mining is still practiced here. The study site ranges from 800 to about 1400m. Part of it lies along Washington Road, from State Highway 20 to town, including part of the riparian zone along Washington Creek. The other part follows Maybert Road east along the South Yuba. Most of the site is in mixed mesic forest on metasedimentary rocks, particularly phyllite, but it includes a large serpentine barren which, at about 1300m, is the highest in the Sierra Nevada. The transition in vegetation across the metasedimentary-serpentine contact is dramatic and instantaneous, and I have used it for many years to demonstrate edaphic control of plant communities.

The mesic vegetation clearly identifies this as a very wet site, but precipitation rarely occurs between May and October. Winter snowfall may be heavy but there is rarely a persistent snow pack except on north-facing slopes at the highest elevations.

The serpentine is interpolated between similar mesic forest above and below. This forest is dominated by Douglas Fir (Pseudotsuga menziesii), Yellow Pine (Pinus ponderosa), Sugar Pine (P. lambertiana), Incense Cedar (Calocedrus decurrens), Bigleaf Maple (Acer macrophyllum), White Alder (Alnus rhombifolia), Dogwood (Cornus nuttallii), Black Oak (Quercus kelloggii), and Goldencup Oak (Q. chrysolepis). Black Locust (Robinia pseudoacacia) is naturalized. The understory includes Hazel (Corylus cornuta var. californica), Tan Oak (Lithocarpus densiflorus), Madrone (Arbutus menziesii), Pacific Yew (Taxus brevifolia), Blue Elderberry (Sambucus mexicana), Deer Brush (Ceanothus integerrimus), and many of the same plants as occur in mesic habitats at Lang Crossing (q.v.). Star Flower (Trientalis latifolia) is abundant. Along Maybert Road there are two major areas of "weeping rocks" that drip water at least through June and, in very wet years, all summer long. These are covered with saxifrages and ferns and project a tropical appearance. The puddles along the roadside at their bases are often covered with butterflies of many species. (Another good puddling site is on the beach at the South Yuba River just southeast of the first bridge.) Beyond the weeping rocks are dry areas with Goldencup Oak woodland and rock gardens with several Penstemon and Keckiella species and Coyotemint (Monardella), which in early-to-midsummer is an excellent nectar source. On Washington Road are cliffs with colonies of Sedum spathulifolium and various ferns. The riparian zone on Washington Creek has the shrubs Aralia californica and Rhododendron occidentale. Very oddly, the Eastern-U.S., naturalized weed Burdock (Arctium minus) occurs along Washington Road; so do the Daisy Fleabane (Erigeron philadelphicus), now treated as native, and the herb Feverfew (Tanacetum parthenium), which is naturalized. There are several flower gardens in town (one more remotely located to the east) that often attract butterflies from the surrounding natural areas; from the veranda of the Washington Hotel, overlooking the river, one can often see Swallowtails (Papilio rutulus, eurymedon and occasionally multicaudatus), silver-Spotted Skippers (Epargyreus clarus),etc. visiting a large Butterflybush (Buddleia) on the hillside below.

The contrast between the densely-vegetated mesic forest areas and the serpentine can hardly be overstated. On the serpentine there is much bare soil and bare rock. Jeffrey Pine (Pinus jeffreyi), Yellow Pine (P. ponderosa), and very strikingly for the elevation, Gray or Foothill Pine (P. sabiniana) all occur, often parasitized by Pine Mistletoe (Arceuthobium campylopodum). Goldencup Oak (Quercus chrysolepis), California Bay Laurel (Umbellularia californica), Whiteleaf Manzanita (Arctostaphylos viscida) and Whitethorn (Ceanothus cuneatus) are present but often stunted. Yerba Santa (Eriodictyon californicum) is common. Most or all of these may represent serpentine-tolerant ecotypes. Beneath many of these plants is a carpet of Milkwort (Polygala cornuta) contained within the drip line. Many scarce or unusual herbaceous species occur, including the purple-flowered variety of the bizarre jewelflower Streptanthus polygaloides, an infamous nickel accumulator; a large and showy serpentine race of S. tortuosus; a decumbent, fleshy race of Dentaria (Cardamine) californica; the Green Gentian Swertia albicaulis; Deltoid Balsamroot, Balsamorhiza deltoidea; two species of onions (Allium) and three Mariposa Lilies (Calochortus); and several Polemoniaceae, Violaceae, Polygonaceae and Apiaceae. One of the most characteristic plants is a dwarf race of Rabbitbrush, Chrysothamnus nauseosus, which blooms in late September and October and at that time is usually the only nectar source available.

Because of the elevational range, Washington has a diverse butterfly fauna and a long flight season of 32-38 weeks, occasionally more. The steep canyon walls promote cold air drainage downstream, which modifies the vegetation to look "cooler" than would be predicted from elevation alone. This is also seen in the butterfly fauna. Quite a few species occur only sporadically or intermittently, and their breeding status is uncertain. Washington is intermediate between the foothills and the lower montane zone, and its species list and phenological pattern both testify to this. Although Washington is higher than Gates Canyon in the Coast Range, many species routinely emerge earlier at Washington in any given year. This probably reflects the fact that Gates Canyon faces east and gets primarily morning sunshine in spring, while at least part of the Washington site faces west and gets afternoon sun. However, at any part of the day long stretches of this canyon will be in shadow, any day of the year!

The west slope-Sierran phenological sibling species of the Comma Skipper complex was first discovered on the Washington Road serpentine (A.M.Shapiro and M.L.Forister.2005. Phenological "races"…Journal of the Lepidopterists’ Society 59:161-165). 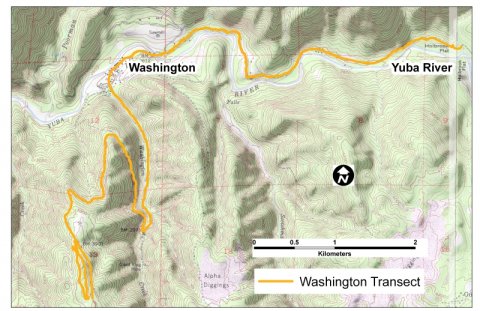