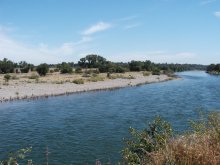 This is a riparian site along the American River Parkway corridor in eastern Sacramento County that differs from the North Sacramento site in being more "upland," representing a transition to the foothills. The elevation is only about 18-22m, but that – combined with the topography -- is enough to make a difference! When this study was initiated, wildland habitat was much more extensive and continuous in the area; the entire adjacent neighborhood of Gold River, near the intersection of Coloma Road and Sunrise Boulevard, was developed on what had been dredge tailings. Nearly the entire area was dredged for gold, leaving behind piles of cobbles in a jumbled landscape. Water is impounded in low spots, creating temporary ponds. On the depositional side of the American River meander at Rossmoor Bar are extensive deposits of gravel or "shingle" with many unusual (mostly foothill) plants. Most of the study site is covered with oak woodland, co-dominated by Interior Live Oak (Quercus wislizenii) and Valley Oak (Q. lobata). Interior Live Oak is much more abundant here than at North Sacramento. Blue Oak (Q. douglasii) is nearly absent, though it becomes the dominant species just a few km upstream beyond Hazel Avenue and just a few m upslope across the river in Fair Oaks. Also present are Gray Pine (Quercus sabiniana), the native Walnut (Juglans hindsii), three species of Willows (Salix), Fremont Cottonwood (Populus fremontii), the naturalized Tree-of-Heaven (Ailanthus altissima) and exotic Prunus and Carya; and in the understory, Coffeeberry (Rhamnus tomentella), California Pipevine (Aristolochia californica), Snowberry (Symphoricarpos rivularis), Coyotebrush (Baccharis pilularis ssp. consanguinea), Himalayaberry (Rubus discolor)(introduced), Blue Elderberry (Sambucus caerulea or mexicana), California Mugwort (Artemisia douglasiana), Wild Grape (Vitis californica, but not forming impenetrable jungles), Wild Cucumber (Marah fabaceus) and Poison Oak (Toxicodendron diversilobum). In wet or springy spots the Common Monkeyflower (Mimulus guttatus), Flat-topped Goldenrod (Euthamia occidentalis) and Epilobium (Boisduvalia) densiflorum are common. A variety of common foothill wildflowers (Clarkias, such as C.unguiculata, Blue Dicks (Dichelostemma pulchella), Fringepod (Thysanocarpus curvipes), etc. can be found in the understory of the Live Oak woodland. The naturalized weed Horehound (Marrubium vulgare), common under live oaks, is a very important nectar source for the now-rare California Hairstreak (Satyrium californicum).

On the shingle at Rossmoor Bar are the shrubby Composites Brickellbush (Brickellia californica) and Heterotheca oregana; Deerweed (Lotus scoparius); three Wild Buckwheats (Eriogonum cf. nudum, E. umbellatum and E. wrightii ssp. wrightii); the Foothill Penstemon (P. heterophyllus); Blazing Star (Mentzelia laevicaulis); Everlasting (Gnaphalium canescens);White Alder (Alnus rhombifolia); the shrubs Buttonbush (Cephalanthus occidentalis) and Mock-Orange (Philadelphus lewisii), and, near the river, great expanses of Tall Verbena (V. bonariensis). Spanish Broom (Spartium junceum) remains common despite efforts by native plant enthusiasts to eradicate it. The frequency of flooding prevents permanent establishment of foothill butterflies (such as the Mormon Metalmark (Apodemia mormo), which feeds on Eriogonum wrightii and is unrecorded in Sacramento County) in this unusual (for the Valley) plant community. In the broad expanses of annual grassland can be found natives such as Soap Plant (Chlorogalum pomeridianum), Narrow-leaved Mule’s Ear (Wyethia angustifolia), Vinegar Weed (Trichostema lanceolatum), Tarweed (Madia elegans), Fiddleneck (Amsinckia) and the uncommon, inconspicuous native Crucifer Tropidocarpum gracile, among others. Jimson Weed (Datura wrightii) is common. The most common of the Filarees is Erodium botrys. Roadsides are lined by Turkey Mullein (Eremocarpus or Croton setigerus), Spanish lotus (L. purshianus) and the naturalized perennial mustard Hirschfeldia incana. Puncture Vine (Tribulus terrestris) is abundant along paths in summer, while Red Carpet (Tillaea erecta) covers the same areas in late winter-early spring. However, the aspect dominants in annual grassland are naturalized annual Vetches (Vicia) in spring and Yellow Star Thistle in summer, often presenting the illusion of a monoculture. The grassland is being invaded by Coyotebrush and Poison Oak, but in some areas the Sacramento County Parks Department has planted large numbers of native oaks – skipping the shrub stage of succession. The area is fire-prone, and due to its heavy recreational use has spot fires most years around the Fourth of July (!). These fires encourage new growth on California Pipevine, which promotes summer and fall reproduction by the Pipevine Swallowtail (Battus philenor).

The butterfly season is 40-52 weeks. Although there is broad overlap in species composition, the phenology of the Rancho Cordova butterfly fauna deviates conspicuously from West Sacramento and North Sacramento, reflecting the enhanced summer drought relative to those sites. Just a few km upstream this effect is even more dramatic; at Iron Point (lower end of Folsom), for example, only 2 or 3 species may be flying in August! However, the spring foothill fauna is better represented there than at Rancho Cordova, with, e.g. the Variable Checkerspot (Euphydryas chalcedona) and the Farmer (Ochlodes agricola) both resident. (The two hosts of E. chalcedona in this area are Bush Monkeyflower (Mimulus or Diplacus aurantiacus) and Bush Penstemon (Keckiella breviflora); the first barely occurs on this site, the other not). The butterfly actually breeds just across the river from the Rancho Cordova site, at Sailor Bar in Fair Oaks. California Buckeye (Aesculus californica) does not occur in the site but is common at Sacramento Bar across the river, and upstream, where it fulfills its usual role as a major late-spring nectar source. At Rancho itself, Coyotebrush is a magnet for everything still on the wing in September, October, and even early November.

A descriptive booklet on the butterflies of the American River Parkway, by A.M.S.(1995), is available from the American River Natural History Association at nominal cost. It is usually in stock at the Effie Yeaw Nature Center in Carmichael (Sacramento County). In the decade since it was written, there have been serious losses from the Parkway fauna. At Rancho Cordova the Large Marble (Euchloe ausonides) and the Sooty Wing (Pholisora catullus) are extinct, Lorquin’s Admiral (Limenitis lorquini) may be extinct, and the California Ringlet (Coenonympha tullia california) is on the verge of extinction.

An excellent, but a bit dated, general introduction to the region is "The Outdoor World of the Sacramento Region," Jo Smith, editor, published by the American River Natural History Association (last revision 1995) (ISBN 1-887815-C3-1)