Sierra Valley is a large, nearly flat valley on the East slope of the Sierra at about 1500m, or the same elevation as Lang Crossing. But it is in the winter precipitation shadow of the Sierran crest and subject to the very cold nights of the high desert -- and it is open to summer precipitation from the northwestward extension of the Mexican monsoon. So it has a Great Basin type of climate, and this is reflected in the vegetation and the butterfly fauna. The latter is an unusually rich mixture of Sierran montane and high desert species, many of them multivoltine. In recent years two species generally considered endemic to the warm-winter climates of the Pacific slope, the Great Purple Hairstreak (Atlides halesus) and the Field Skipper or Sachem (Atalopedes campestris) have become established as breeding residents at Sierra Valley, apparently capable of overwintering. The Field Skipper has greatly extended its range northward in the past 30 years and is also invading western Nevada, where it recently became established in Carson Valley and also at Verdi. It remains to be seen whether these surprising range extensions will persist and even expand. The mixed character of the Sierra Valley fauna is demonstrated by several very dynamic eco-evolutionary situations. The lowland and montane subspecies of the Field Crescent (Phyciodes campestris campestris and Phyciodes campestris montana respectively) intergrade completely in the Feather River Canyon of the northern Sierra. Despite its location on the Sierran East slope, Sierra Valley actually drains northwestward into the Feather River. Early in this study the site was occupied by an intergrade population like those in the canyon. This population later went extinct. At present there is a low-density population of seemingly typical montana on site. Similarly, early in this study there was a resident population of the Sierran form of the Tailed Copper, generally considered to be Lycaena arota arota. This went extinct and was subsequently replaced by the high desert subspecies, L. a. virginiensis! The population of Lycaena arota virginiensis has now not been seen for two years.

There is a great deal of irrigated alfalfa grown in Sierra Valley, which serves as host to both the Orange Sulphur (Colias eurytheme), and its yellow counterpart, Colias "philodice" eriphyle. These two hybridize rather freely here, and we tracked this phenomenon for some 70 generations. During the study, eriphyle went extinct in Sierra Valley when low water tables forced the growers to stop irrigating. It did not go extinct in the Honey Lake basin to the north or in Carson Valley to the south, and recolonized within two years. There is substantial evidence that C. eurytheme undergoes seasonal altitudinal migration, arriving in late May-early June each year regardless of its overwintering success.

A comparable phenomenon occurs with the Checkered White (Pontia protodice), which overwinters some but not all years in Sierra Valley but in any case colonizes upslope from the desert in May-June almost every year. In sympatry with the Western White (P. occidentalis), it produces hybrids at low frequency. These have not been detected molecularly, but about 1% of wild-collected individuals are undeterminable by wing phenotype.

Two more fascinating eco-evolutionary stories have been investigated in this fauna. In the Mitoura gryneus group of Cupressaceae-feeding Hairstreaks, M. g. nelsoni feeds on Incense Cedar (Calocedrus decurrens) and occurs in mesic forest in the Sierra, both along Highway 89 between Sierraville and Truckee, and just a few km west of Sierraville along Highway 49 between Sattley and Yuba Pass. M. "chalcosiva" or "brown siva" (or M. g. chalcosiva) feeds on Western Juniper (Juniperus occidentalis) and is very abundant on the east side of Sierra Valley. These two are very closely related and can hybridize in the laboratory but do not seem to be in actual contact here at this time.

The Common Checkered Skipper (Pyrgus communis) seemingly occurs continuously across the Sierra Nevada, but actually it does not. Sierran populations above 1500m are univoltine and feed only on native mallows of the genus Sidalcea (generally S. glaucescens). Low-elevation West slope, Central Valley and coastal populations AND the Sierra Valley population are multivoltine and feed today primarily on weedy naturalized species of Malva. These differences are reflected molecularly, though there are no genitalic differences. Sierra Valley multivoltines and Sierran univoltines get about as close to each other as the Mitouras do.

The Sierra Valley population of the Ringlet (Coenonympha tullia), is the East slope subspecies ampelos. The West slope, subspecies, california, occurs below 1500m across the crest. The two are not in contact at the latitude of I-80, but they intergrade just slightly to the north – specifically, in the rail yard at Portola. Similarly, the Sierra Valley population of the Comma or Colorado Skipper complex (Hesperia colorado, formerly H. comma) is the Great Basin subspecies, while the West slope subspecies occurs up to Donner and Yuba Passes. But the two intergrade both phenotypically and molecularly in the Feather River Canyon.

The butterfly season is 30-40 weeks. A surprising number of species and individuals fly until the onset of truly intolerable weather in late October or November. 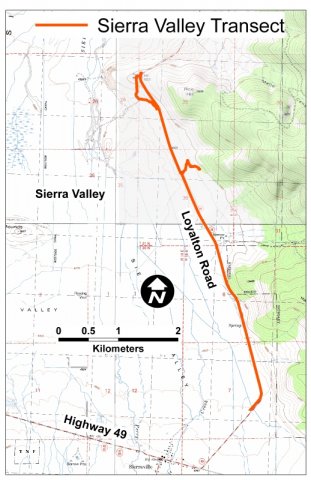