This is a bottomland site which was deliberately laid out to embrace butterfly habitat on both sides of the east levee of the Yolo Bypass. The elevation is about 9 m, thus similar to North Sacramento. The Yolo Bypass is a flood-control channel that runs along the east side of the Sacramento Valley between Sacramento and Davis; the railroad crosses it on trestles and I-80 is elevated as well (the Yolo Causeway). In summer most of the Bypass is dry, albeit with a high water table, and is farmed for a variety of crops including corn, melons, sunflower, safflower, milo, rice and wild rice. In winter, when storms or thaws in the mountains or both produce flows in the Sacramento River system that threaten urban flooding, a series of fixed weirs allows the excess to be released into the Bypass, whence it flows southward to the Sacramento-San Joaquin Delta and ultimately through the Golden Gate into the Pacific Ocean. In the process very rich alluvium is laid down, as in other floodplains. In wet years like 1982/83 or 2005/06, the Bypass may remain continuously flooded for three to as much as six months. This would be expected to have catastrophic impacts on the butterfly fauna.

In years of severe and persistent flooding, all but the tree-breeding butterflies (e.g., Western Tiger Swallowtail (Papilio rutulus); Mournful Duskywing (Erynnis tristis) are eradicated in the Bypass portion of the site. When the water withdraws, the first butterflies to colonize are typically the Cabbage White (Pieris rapae), and the Buckeye (Junonia coenia) – both typically into their second or third broods by then. We routinely see a huge butterfly "explosion" involving many multivoltine species late in the season in the Bypass only. The interpretation of this is that natural enemies, especially parasitoids, are even more heavily impacted regionally than the host butterflies, and have less mobility. Thus when the butterflies recolonize, they may be able to build up numbers very rapidly in the absence of density-dependent controls. Eventually the system returns to an equilibrium of sorts – or flooding again intervenes. This is a fascinating dynamic, since the Bypass portion is dependent on the adjacent "upland" for colonists to repopulate it in flood years. The flight season is 44-52 weeks/year. With the apparent extinction of the Willow Hairstreak (Satyrium sylvinus), the entire butterfly fauna of this site is now multivoltine!

Very dramatic land-use changes have occurred adjacent to the "upland" portion of this site, with commercial and light-industrial development eating up much of the previously extensive wide-open space (annual, weedy grassland). The Bypass is sheltered from development as a floodplain – but as we have seen, cannot itself sustain butterfly populations through bad flood years. The south-facing side of the railroad embankment is a regional "warm pocket" where the first individuals of many species are routinely observed in late winter.

The references given for Rancho Cordova (q.v.) are also useful here. 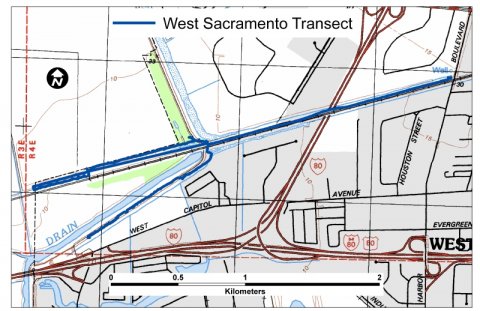