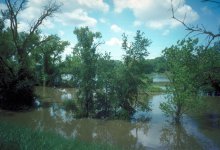 The most characteristic vegetation of this floodplain site is the classic Valley-riparian "grapevine jungle," presenting an almost tropical appearance. With rich bottomland soils and a high water table – the elevation is only about 8m – woody plants run riot here along the American River. The dominant trees are Valley Oak (Quercus lobata), Fremont Cottonwood (Populus fremontii), and Boxelder (Acer negundo). Associated with them are Oregon Ash (Fraxinus latifolia), at least three Willows (Salix), Walnut (Juglans hindsii) and the naturalized Black Locust (Robinia pseudacacia). All are heavily festooned with wild Grape (Vitis californica). California Sycamore (Platanus racemosa) is no longer present naturally, but has been planted in several locations; the nearest native stand is at Discovery Park. Streamsides are lined with Buttonbush (Cephalanthus occidentalis) and, increasingly, the naturalized Argentine Flame Pea (Sesbania punicea). Tall Dogbane (Apocynum cannabinum), Showy Milkweed (Asclepias speciosa), Perennial Peppergrass (Lepidium latifolium; an invasive weed), Flat-Top Goldenrod (Euthamia or Solidago occidentalis), Tall Verbena (V. bonariensis), and Lippia (L. or Phyla nodiflora) are important butterfly nectar sources. Large areas have a dense understory of mixed Himalayaberry (Rubus discolor) and Poison Oak (Toxicodendron diversilobum). The large native nettle (Urtica dioica or holosericea) is locally common and hosts four species of Nymphalid butterflies. The native Sweet Pea (Lathyrus jepsonii var. californicus) is common and a Lycaenid host. Part of the site was agricultural land until recently – used primarily for growing Safflower (Carthamus tinctoria) – and the vegetation there is very labile, including in different years great quantities of Wild Radish (Raphanus), Cleavers (Galium cf. aparine), Cocklebur (Xanthium strumarium), Annual Sunflower (Helianthus annuus), Yellow Star Thistle (Centaurea solstitialis), and other annual weeds. Floodplain succession, however, leads here to a thick carpet of Bermuda Grass (Cynodon dactylon) which suppresses all the annual weeds except around local disturbances like animal burrows, while permitting the coexistence of perennial herbaceous plants such as Alkali Mallow (Malvella leprosa) and Heliotrope (Heliotropium curassavicum) and serving as an excellent "nurse" for the invasion of woody plants, including Blue Elderberry (Sambucus caerulea or Mexicana), Himalayaberry, Cottonwood, and Valley Oak. There is rather little Coyotebrush (Baccharis pilularis ssp. consanguinea). Spanish Lotus (L. purshianus) is common along roadsides, and the introduced Bird's-Foot Trefoil (L. corniculatus) in low places with grasses. The sedge Carex barbarae and the stoloniferous perennial grass Phalaris lemmonii form local monocultures, generally in the riparian woodland-grassland ecotones. Until 2005 large areas of swamp forest had been invaded successfully by Elms (Ulmus; the taxon is uncertain) which had begun to form dense thickets replicating bottomland forests in the Midwest. However, in 2005-06 these died back heavily, apparently from Dutch Elm Disease, and the future of the invasion is cloudy.

Because of the excellent cover and proximity to downtown Sacramento and to social services, this site is routinely used for camping by homeless people.

The butterfly season is 44-52 weeks. Because much of the site is subject to flooding, which may persist locally for several months, overwinter survivorship of even common species that breed near ground level is unpredictable. In the 2005-06 season flooding persisted for 6 months in some places, causing catastrophic losses; it will be interesting to document the process of recovery, since everything presumably survived somewhere in the area. Two definite extinctions that preceded this event were those of the California Ringlet (Coenonympha tullia california), and the Large Marble (Euchloe ausonides) the latter has disappeared regionally. The Willow Hairstreak (Satyrium sylvinus), formerly extremely abundant at this site, had been in decline for years before going unrecorded at all in 2006. The North Sacramento fauna as it was early in this study may be a rather good approximation of the riparian fauna before European colonization.

The references given for Rancho Cordova are also useful here (q.v.). 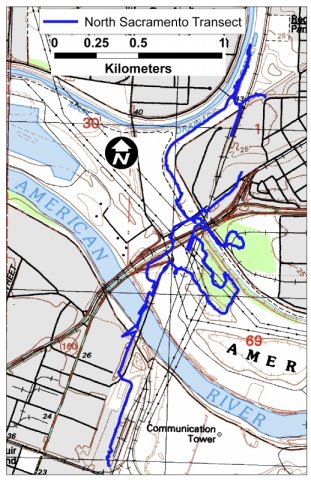