Gates Canyon is located in the Vaca Hills, part of the North Inner Coast Range just west of Vacaville, Solano County. It is the canyon of Alamo Creek, a semi-permanent stream (dry at the surface in its lower reaches in late summer) draining into Pleasants Valley, which runs N-S between the Vacas and the lower English Hills. As an eastward-draining canyon it has N- and S-facing slopes which differ dramatically in vegetation.

The location and topographic setting of Gates Canyon produce a precipitation anomaly, giving it approximately twice the annual rainfall that might otherwise be expected from regional data, and excessive amounts with severe winter storms produce flash floods and remodel the canyon to varying degrees. The heavy rainfall contributes to rich flora and butterfly fauna.

The lower part of the canyon (from the mouth to about 190m) is largely devoted to agriculture, particularly fruit-growing and cattle grazing, with a few small vineyards and scattered houses. Although cattle graze higher up the canyon, as it narrows and the walls become steeper human impacts are greatly lessened. The upper end of the study area is arbitrarily set around 600m. All the land in the canyon is private, and survey is done on and from the road. Although there are potential limitations on how well a canyon-bottom survey reflects the butterfly fauna of the canyon as a whole, since the object of the study is interyear comparison these can properly take a back seat to methodological consistency. (That is, there is no reason to suspect that coverage is more effective in some years than others, given consistent methodology.)

The Vaca Hills, like the surrounding area, have a Mediterranean climate in which <5% of annual precipitation normally falls from June through September – often there is no measurable precipitation in summer. Summers are sunny and hot, with afternoon temperatures often exceeding 100F (38C), but a wind gap open to the southwest allows the sea breeze to penetrate the canyon directly, as well as more indirectly from the south end of Pleasants Valley where it merges into Lagoon Valley. This, and the shade cast by the south wall of the canyon, makes it less hot than even Mix Canyon, the next canyon north. In winter the valley fog penetrates the canyon only weakly and irregularly. Hard freezes are infrequent. The butterfly season is 44-52 weeks/year, though very little is present from late November through mid or late January.

The vegetation of Gates Canyon contains elements of all the major regional plant communities except those endemic to unusual soils. The flora and vegetation are very responsive to slope and exposure and concomitant levels of insolation and drought stress. The north and south facing slopes have special species, and for species found on both there may be striking differences in seasonality.

The agricultural land at the base of the canyon has a typical weedy flora, including annual grasses of Mediterranean origin, three annual species of mustards (Brassica) and one of wild radish (Raphanus), Sweet Fennel (Foeniculum vulgare), mallows (Malva), pigweeds (Amaranthus), and the native Fiddleneck (Amsinckia), etc. The recently naturalized small Pot-Marigold (Calendula officinalis) is common around the orchards.

Across the upper reaches of the canyon, barely impinging on the study site, is extensive mixed chaparral, dominated by Chamise (Adenostoma fasciculatum), with associated Manzanita and Wild Lilac, Scrub Oak (Quercus berberidifolia), Chaparral Pea (Pickeringia montana),Redberry (Rhamnus crocea), Virgin's Bower (Clematis lasiantha), etc.In the draws, Gray Pine is usually dominant. The chaparral zone was deliberately excluded from the site in order to keep the length of the survey walk tractable.

Weeds such as Yellow Star-Thistle (Centaurea solstitialis), annual Mediterranean thistles, Sweet Fennel and annual grasses can be found along the immediate roadside except in the coolest, moistest, shaded areas. One naturalized weed, Hedge Mustard (Sisymbrium officinale var. leiocarpum), is found only in the cool, shaded areas (where it is used as a Pierid host plant).

The native foothill butterfly fauna is phenologically coordinated with the flora, being either single- or double-brooded in spring and dormant through the summer, fall and winter (!). Only one common butterfly, the Woodland Skipper (Ochlodes sylvanoides), flies only in the second half of the season—though many multiple-brooded, weedy species colonize upslope into the canyon temporarily in summer, mostly associated with roadside weeds. Butterflies whose larvae feed on riparian trees are generally double- or triple-brooded, as their hosts continue to put on new growth throughout the summer. The two most important nectar sources are California Buckeye in late spring and Coyotebrush (Baccharis pilularis ssp. consanguinea) in autumn.

Further ecological information about the Vaca Hills is available from:

Correigh Greene and Mikaela Huntzinger,eds. 2001. The Natural History of Stebbins Cold Canyon Reserve.University of California Natural Reserve System. ISBN 09714563-0-5. and University of California Natural Reserve System.2004. Natural History of the Quail Ridge Reserve. U.C.Davis. (Keep in mind that although close to Gates Canyon, each of these sites has its own unique properties.)

Gates Canyon Images after the 2020 fire, photos by Rob Fernau. 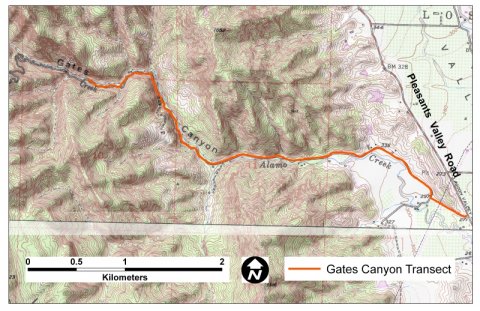