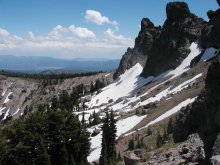 The crest of the Sierra Nevada is highest in the south and lowest in the north. The term "High Sierra" is properly applied to the region from slightly north of Yosemite to Cottonwood Pass. Tree line south of Lake Tahoe is above 3000m but drops to about 2750m on the north side of Lassen Peak in the South Cascades. There are several areas of alpine vegetation on the highest peaks north of Lake Tahoe. The definition of "alpine" for these areas is based on treelessness and floristics (the plant species present); none of these areas fits the climatic criteria to be considered truly "alpine," and treelessness is dependent on highly site-specific factors including soil development and texture, wind, and the local distribution and persistence of snow. Munz in 1970 listed 24 "indicator" plant taxa for the "alpine fell-field" community. Of these 6 occur north of Donner Pass in Nevada County, along with numerous others treated as "alpine" by F.J.Smiley. From a floristic standpoint the northernmost of these areas are on Mount Lola and Castle Peak/Basin Peak. All of them are on andesitic or basaltic mudflows (lahars) that sit atop the granodiorite core of the Sierra. These substrates produce a coarse-grained soil that drains quickly. This contributes to a short growing season between snowmelt and the onset of summer drought. This in turn contributes to treelessness. As early as 1921, Smiley noted that a tree line was present only on the west slopes of these mountains, and related it to the prevailing westerly or southwesterly winds. During winter, these winds scour the snow from the windward slope and, upon breaking into turbulent eddies on the leeward slope, redeposit it there. The result is massive cornice development, which can be seen especially on Castle and Basin Peaks, and on Anderson Peak to the south of Donner Pass. Deprived of the insulation normally provided by snow pack, the windward slope is subjected to a combination of very low temperatures and desiccating winds. The uppermost trees on this slope are picturesquely battered and distorted, forming matted krummholz (elfinwood). Even in summer, the ridge between Basin and Castle Peaks is usually uncomfortably windy. In years of heavy snowfall, the cornices may not melt completely before the onset of new snow in autumn. Following the 1982/83 "Year of the Big Snow," with >200% of average snowfall, the Basin Peak cornice persisted for three Years and some individual plants were immured beneath it the entire time, but survived.

In the southern Sierra the Alpine Zone is extensive and continuous over large areas, but it becomes increasingly fragmented northward. Given the small areas involved and their isolation from one another, one would (correctly) predict that the alpine butterfly fauna would rarefy northward.

The study site at Castle Peak ranges between 2400 and 2775m and as already noted is almost entirely situated on volcanic mudflows—only a few small granodiorite exposures occur, mainly on the lower flanks of the ridge between the summits, and at the west end of Round Valley near Peter Grubb Hut. The forest is strongly dominated by Red Fir (Abies magnifica) but this species rarely appears at tree line, which is defined by Western White Pine (Pinus monticola) and Mountain Hemlock (Tsuga mertensiana), both commonly in krummholz mode. The treeless area is a complex mosaic of plant associations reflecting soil and climatic influences. Several of these occur along and adjacent to the ridgetop trail connecting the two summits. As the snowpack retreats to the east in spring, successive waves of wildflowers appear, much like the concentric rings characteristic of drying vernal pools in the Central Valley. This prolongs the flight seasons of some butterflies, for which the seasonal "window of opportunity" in any one spot is usually fleeting. Peak wildflower and butterfly season in the treeless areas rarely exceeds four weeks, but the overall butterfly season is 15-18 (rarely to 24) weeks. The first visit to this site typically occurs at or near the peak of butterfly diversity in late June to mid-July, usually with >20 species flying. The reason for this is that access to the treeless area is blocked by persistent, deep snow in the Red Fir zone below until well after butterflies have begun emerging on the crest. Even in years of relatively light snowfall, snow persists late along the trail on the western flank of Castle Peak above Castle Pass, and on the north-facing slope between Castle Pass and Round Valley. The species lists demonstrate clearly that almost never are entire species flights missed because of this delay. But we are missing the shape of the species-richness curve at the beginning of the season. The frequency and severity of summer thunderstorms – usually an epiphenomenon of the southwest desert (Mexican) monsoon – vary greatly among years. A dusting of snow or hail is not uncommon in these storms. Whatever precipitation may fall quickly percolates down through the coarse soils, so they give little relief from summer drought stress.

Two plants that consistently occur in very cold sites where they receive late snow-melt water are Alpine Sorrel (Oxyria digyna) and Sierra Primrose (Primula suffrutescens); both are prone to remaining under snow all year in wet years. Almost as susceptible to this fate when growing on northern exposures is Davis' Knotweed, Polygonum davisiae, which is an aspect dominant on the lower flank of the ridge, where it forms a reddish belt clearly visible from I-80 as it dries up after midsummer.

Chabot and Billings (1972) showed that much of the Sierran alpine flora is derived from the Great Basin, and there are conspicuous Basin elements in the Castle/Basin flora, including the Alpine Sagebrush (Artemisia arbuscula) and the common Sagebrush (A. tridentata) which have different environmental requirements but meet and form a hybrid swarm here and elsewhere in the northern Sierra; Bitterbrush (Purshia tridentata), which forms dense mats along the ridgetop; Rabbitbrush (Chrysothamnus nauseosus, var.?) and Daggerpod (Phoenicaulis cheiranthoides), one of the showiest and earliest-blooming wildflowers. The Great Basin connection is also illustrated in the butterfly fauna – the Sagebrush Satyr (Cercyonis oetus), being a conspicuous example.

A few of the many other plants recorded above tree line at Castle/Basin Peaks are the Composites Railardella argentea and R. scaposa, Ericameria discoidea and E. bloomeri, and Chaenactis nevadensis; the Indian Paintbrushes Castilleja ambigua, lemmonii and nana and Orthocarpus cuspidatus (formerly usually referred to as O. copelandii); Jacob's Ladder (Polemonium pulcherrimum); Rock-fringe (Epilobium obcordatum); Blue Flax (Linum lewisii); several species of Lupines; several species of Wild Buckwheats (Eriogonum); several species of Locoweeds (Astragalus) of which the most distinctive is Whitney's (A. whitneyi), an important butterfly host plant; and the Apiaceous plant Cymopterus terebinthinus, a host of the Anise Swallowtail (Papilio zelicaon).

On the lower slopes along snowmelt channels and in swampy or boggy spots, Broadleaf Lupine (Lupinus latifolius), Arrowhead-Leaved Grounsel (Senecio triangularis), Cow-Parsnip (Heracleum lanatum), Corn-Lily (Veratrum californicum) and a variety of other showy flowers, associated with grasses and sedges, form a distinctive association. These plants also occupy much of Round Valley. Around the periphery of Round Valley the dominant tree is Lodgepole Pine (Pinus contorta ssp. murrayana).

The phenomenon of hilltopping is dramatically illustrated at Castle and Basin Peaks and, in fact, on each of the projecting rocky knobs along the ridge between them. In mountainous terrain many insects, including many butterflies, use rocky summits as rendezvous points for mate-location. As a result, dense concentrations of butterflies of several species can be observed at such sites. Among the most abundant and conspicuous of these are the Anise Swallowtail (Papilio zelicaon), and the Western White (Pontia occidentalis). The Indra Swallowtail (Papilio indra), "hilltops" below the summit, flying just below its congener (and just beyond net range, as a rule!). Hilltopping aggregations are almost always overwhelmingly mate-biased. In general, females mate infrequently (many mate only once) and so may visit the hilltop only once or twice, while males return day after day. It should be noted that often the host plants are not present at the hilltop, so the females, once mated, must go elsewhere to oviposit.

During mass migrations of the California Tortoiseshell (Nymphalis californica), the entire ridge as well as the summits may be blanketed by these butterflies. On the lower flank of Basin Peak a little above Round Valley they may cover flowering Mountain Pennyroyal (Monardella odoratissima) so thickly that the masses appear orange, not pink. This butterfly estivates above tree line, but persistent estivating aggregations have not been observed on Castle or Basin Peak although they do occur nearby on Mount Rose. 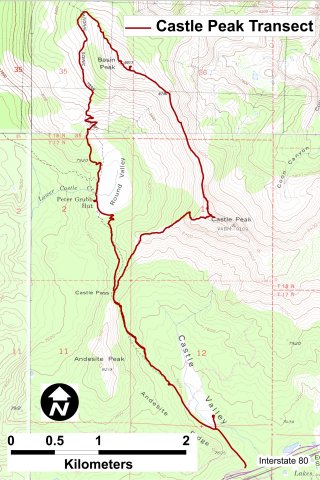