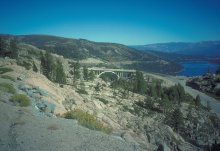 Donner Pass is permanently etched into America's national consciousness. The tragic and heroic saga of the Donner Party was publicized in a best-selling book by Charles Fayette McGlashan, leading citizen of Truckee at the end of the 19th Century – and prominent Lepidopterist. Many of the foremost butterfly collectors of the day would ride the rails to Truckee in order to go afield in the Sierra with McGlashan and his "butterfly farmer" daughter Ximena. There is thus a link between Donner Pass history and Donner Pass butterfly diversity that goes back over 100 years.

Donner Pass was also the first site in the western United States to receive a thoroughly modern workup of its butterfly fauna, published by brothers John and Tom Emmel in the early 1960s. I was already familiar with Donner Pass faunistics a decade before I first laid eyes on the place, thanks to these pioneering papers—so it was only natural that I explored Donner Pass as a candidate site for this study, and it easily met all the criteria for selection. Ultimately, it turned out that Donner had – for area – one of the richest butterfly faunas documented in North America, north of Mexico!

At 2000-2200m, Donner is essentially a high-montane locality with some subalpine characteristics, mainly at its east end. The western side of the pass is rolling, with relatively gentle relief and soils derived from both granodiorite and andesitic mudflows. The eastern side at pass level is nearly all granodiorite, with mudflows capping the high country above Donner Ski Ranch and all around the Sugar Bowl resort. The slopes are much steeper, especially on the east face where there is a very rapid dropoff to Donner Lake, and dramatic glacial features such as the coxcomb atop Donner Peak. The abrupt east slope, now beloved of rock climbers, necessitated the disassembly of the pioneers' wagons, which were hoisted to the top in sections and then put back together. The original pioneer trail and the early automobile road through the pass lie within the study site, which ends near the Donner Lake overlook and the picturesque Rainbow Bridge dating from 1925. Much of the sampling route follows the Transcontinental Railroad through the pass.

Donner is subject to summer thunderstorms, usually produced when the Mexican monsoon penetrates farther northwestward than average. These storms are spotty and rarely severe, though they may be accompanied by hail. Frontal precipitation is very rare during butterfly season (June through late September-October).

The "climax dominant" vegetation of most of the Pass is Red Fir (Abies magnifica) forest, with an admixture of Lodgepole Pine (Pinus contorta ssp. murrayana), Jeffrey Pine (P. jeffreyi) and Western White Pine (P. monticola). Wherever these trees form a near-continuous canopy, butterfly diversity is very low. Indeed, the only butterfly species in the Donner fauna that can be characterized as a Red Fir associate is Hoffmann's Checkerspot (Chlosyne hoffmanni), and even it is rarely seen in shade. Lodgepole Pine is the earliest invader in forest succession, as a rule – especially around drying meadows, as is dramatically evident all around the valley that used to be Lake Van Norden. Such stands are typically very dense and monospecific.

Both Black Cottonwood (Populus trichocarpa) and Quaking Aspen (P. tremuloides) are common. On the slope above the railroad tracks about midway through the pass, Aspen is squashed by its burden of snow and grows in a more-or-less krummholz mode.

Donner Pass is one of the snowiest places in the United States and is the site of the Sierra Nevada Snow Laboratory (one of our sources of climatological data), jointly managed by the Federal government and the University of California. Snowfall varies greatly from year to year, and the beginning of the butterfly season is dictated by the timing of snowmelt — averaging at the beginning of June, but in very light years as early as April and in very snowy years not until late June, or even July. The persistence of snow on north- and east-facing slopes prolongs the flight seasons of many univoltine butterfly species well beyond what one might otherwise expect. Lycaena cupreus, for example, may still be flying at the east end of the pass three weeks after disappearing to the west. At the beginning of the season Willow catkins (Salix spp.) and weedy Dandelion (Taraxacum officinale) are the principal nectar sources at the west, joined by Phlox diffusa at the east. These are soon supplanted by Pink Pussy Paws. After early September the only nectar source in most years is Rabbitbrush, which grows mostly along Donner Pass Road (especially at the east) and attracts everything flying then. In between, in high summer, butterflies have a dazzling array of nectar sources available.

The butterfly flight season varies from about 24-32 weeks. In some years, multivoltine species continue to emerge even into November, after the adult hibernators have gone to bed for the winter. These "false broods" are almost certainly doomed, and reflect the status of those species as seasonal breeders ill-adapted to overwintering at Donner. The Donner fauna includes a large number of non-resident species recorded as casual visitors from lower on both slopes of the Sierra Nevada – a characteristic phenomenon at the lower Sierran passes, less prominent at the higher ones which are more harsh and remote. This contributes to, but does not fully explain the fact that butterfly diversity on the transect is maximized here. The phenomenon is discussed in the butterfly chapter of the Sierra Nevada Ecosystem Project, referenced below; it is a routine observation for many groups of organisms world-wide that diversity is maximized at mid-elevations.

Aside from general Sierra Nevada natural history references, consult:
T.C. Emmel and J.F. Emmel, 1962, Ecological studies of Rhopalocera in a high Sierran community—Donner Pass, California. Journal of the Lepidopterists' Society 16: 23-44 and 17:7-20; 1963. Composition and relative abundance in a temperate zone butterfly fauna. Journal of Research on the Lepidoptera 1:97-108. 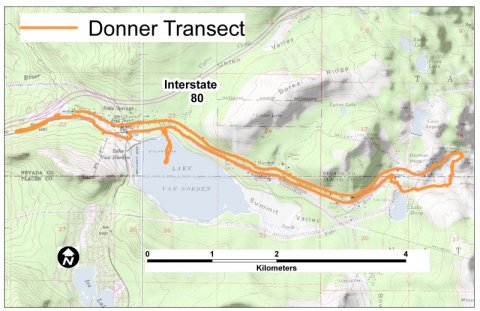