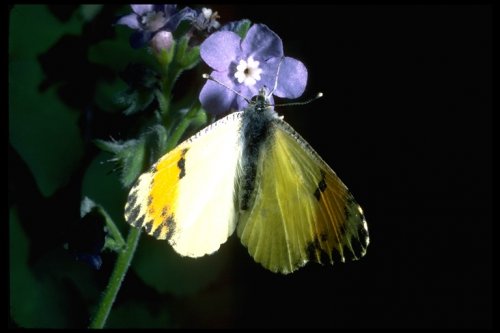 Similar to the Sara Orange-Tip but the ground color is very pale yellow in the male and a warmer yellow in the female. There are many detail differences in the wing pattern, as well as a consistent difference in the venation of the forewing. Stella was formerly considered a subspecies of sara and is still so listed in some books. However, it co-occurs with both A. sara sara (Sierran West Slope) and A. sara thoosa (East Slope) in some places without interbreeding, as shown by molecular genetic studies, so we conclude that it has attained biological species status. It is endemic to the Sierra Nevada from Plumas County south, generally above 5000'. It occurs in open forest, along streamsides and roads or trails through forest, and in rocky canyons. Males "fly a beat."

There is one brood early in the season (March to July); this is one of the first non-hibernators to appear at, say, Donner Summit. The eggs are laid singly on Rock Cress (genus Arabis; in our area especially on A. holboellii) and the larvae feed on the buds, flowers and fruits. The adults very commonly visit the flowers of the host, but are not restricted to them. In our area Arabis is often attacked by a parasitic fungus that transforms the growth pattern of a shoot (sometimes an entire plant) and turns the upper foliage yellow, creating a "mock flower" that attracts insects which serve to disperse the spores. The Stella Orange-Tip, however, avoids such plants and has never been seen to oviposit or feed on them. 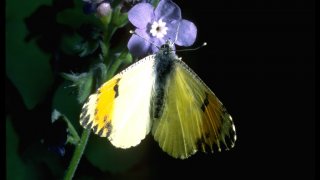