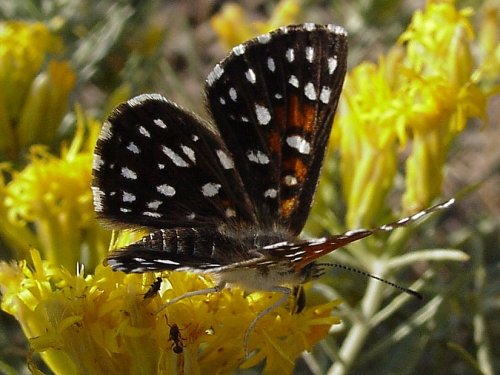 A very local, colonial species found from sea level to 7000' in a variety of mostly open, rocky habitats. Its flight is very distinctive - it wheels in circles and often does figure-eights, and is very difficult to track with the eye - and it is very "nervous" on flowers, keeping the wings in constant motion. The compound eyes are a remarkable shade of pea green. Females are conspicuously larger than males, with much broader wings; the male forewing is sharply angled at the apex. There is much geographic variation which, however, does not impinge on the populations along our transect (which are all nominate mormo). There is a Federally protected, endemic subspecies (Lange's Metal-Mark, A. m. langei) at the Antioch Dunes. Farther south different "ecological races" of A. mormo may occur in the same area but fly at different times of the year. These may in fact be biological species.

This is our only member of the Riodinids, considered either a family of their own or a subfamily of the Lycaenidae depending on your authority. This is mostly a New World tropical group, with an amazingly diverse array of species, many of which enter into mimicry associations or are very bizarrely coloredor shaped, looking more like the fanciful butterflies on greeting cards than any other real butterflies do. Many of these tropical species are rare in collections. The group as a whole is strongly ant-associated.

Our scattered populations of the Mormon Metal-Mark are very strongly associated with their hostplants, perennial Wild Buckwheats (genus Eriogonum, family Polygonaceae) - but the partixcular species differ from place to place, and the plants are usually much more widespread than the butterflies are. At Lang Crossing this species uses Sulphur Flower (E. umbellatum) and (less often) Wright's Buckwheat (E. wrightii). At the east end of Donner Pass it uses only E. wrightii growing on granodiorite. Low-elevation populations are often on members of the very common E. nudum group. Some populations of the butterfly have not moved ten feet in over 30 years!

One brood, midsummer below 5000' but late September-early October at Donner, where it seems to be tempting fate by emerging so late. In the interior North Coast Range, where populations are often on the lowland "race" of E. wrightii, they may also emerge very late. Adults visit Eriogonum flowers and rarely much else, but at Donner they have been found at Rabbitbrush, and at Windy Point on Bowman Lake Road on the pink flowers of Eupatorium occidentale. There are a few records of nectaring on Yerba Santa and pink Dogbane, too. 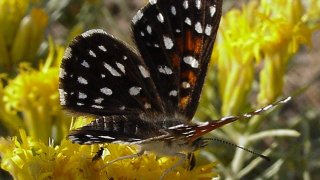 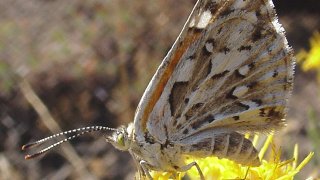