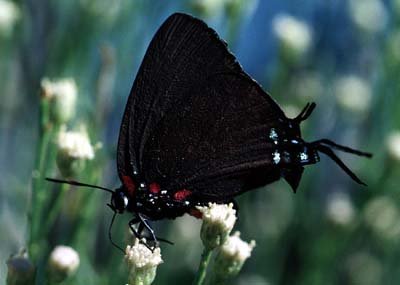 The common name is a misnomer insofar as there is no purple anywhere on this very showy, tropical-looking animal. The Great Purple Hairstreak occurs from sea level to about 5000' wherever its host plants, broadleaf mistletoes, occur. It is commonest in Valley and foothill riparian forest and in older urban neighborhoods with a well-developed canopy, and in foothill woodland. In recent years this species, which had turned up as a presumed stray in autumn on Rabbitbrush, became established as a breeding resident at Sierra Valley. This was unexpected, as it has been assumed to be intolerant of cold winters! In urban areas this insect can be common but unnoticed, spending its time in the canopy where at best it may be spotted as a moving blue flash. But it does visit garden flowers such as Lantana and Zinnias, and in riparian forest routinely visits Dogbane, Milkweed, Goldenrod, California Buckeye, members of the Carrot Family (Apiaceae)and the obnoxious weed Perennial Peppergrass. Pupae can be found in litter under mistletoe-infested trees, but are usually parasitized.

Males hilltop and perch, but in flat country the mating behavior is undocumented. There is no phenotypic variation.

The hosts are Phoradendron villosum (P. flavescens var. villosum), the small-leaved mistletoe restricted to Oaks; P. macrophyllum (P. tomentosum), the large-leaved mistletoe found on a great variety of broadleaf trees other than oaks (and occasionally on shrubs, even Poison Oak!); and P. juniperinum, found on junipers and cypresses (the host at Sierra Valley and on serpentine where MacNab and Sargent Cypresses occur). The species breeds continuously in warm weather (March-October in the Valley and foothills; June-October at Sierra Valley). In the Sacramento Valley it is commonest in June and September most years, but individuals can turn up any time. 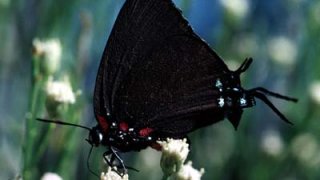 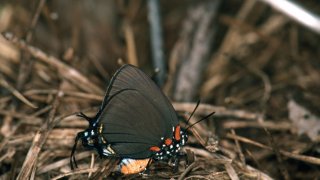 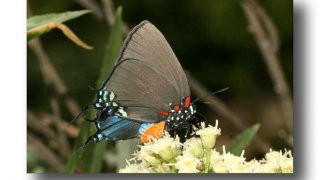