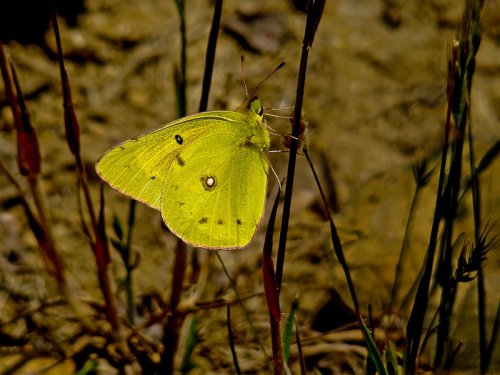 Ubiquitous except in closed-canopy forest; one of our commonest butterflies, often reaching very high densities in alfalfa fields in midsummer to autumn and becoming conspicuous at that time; when the alfalfa is cut may emigrate en masse, even flooding into cities. This is also our most variable butterfly, seasonally and individually. Cold-season specimens are small, very heavily infuscated on the ventral hindwing, with reduced black borders above, increased basal black above on all wings, and the orange pigment concentrated into discal patches on a bright-yellow ground. (This is quite different from the even orange-yellow of hybrids with the Yellow Sulphur, q.v.). Summer animals are large and bright, much more orange, with broad black borders and few if any black scales on the hindwing beneath. Summer males have much more "high-angled" (triangular) forewings than cold-season ones, reflecting a different style of flight. Many females - up to 50% - have the ground color white. A very rare mutant ("blonde") produces whitish butterflies in both sexes, with a creamy look. In autumn intergrades between orange and white females occur.

The red eggs are laid singly. The larva is basically green with a white-and-pink line on each side, but may have very variable black markings as well. The pupa is apple-green with rosy highlights.

Although it is a significant Alfalfa pest, this butterfly overwinters as a larva almost entirely in annual vetch at low altitudes, and colonizes Alfalfa only as the vetch senesces in May-June. Aside from Alfalfa and annual vetches, it also breeds on a variety of Clovers and Sweet Clovers and occasionally on Lupines. It seems certain that the planting of Alfalfa has greatly increased its range and abundance. There are multiple broods, essentially all year at sea level. At higher elevations overwintering may be more problematic, though it definitely occurs some years even at Donner. The high Sierra is colonized annually in late May or June by second-brood flyups from lower elevations. Often the winter-form butterflies from overwintered larvae emerge at Donner after the big, richly-colored summer immigrants arrive! This species apparently overwinters every year at Sierraville, but in some years much better than others.

Males patrol host plants and often mate with just-emerged (teneral) females. The often-observed rising, spiraling flight involving a male and a female is not a nuptial dance but a rejection ploy by the female, which will suddenly pull out of the spiral and drop to ground level. Teneral mating, as well as very high densities in agricultural populations, favors hybridization between this species and the Yellow Sulphur where they are sympatric - east of the Sierran crest only. Bright yellow specimens occasionally taken in the Sacramento Valley are apparently pigmentary mutants of local origin, and do not reflect a history of hybridization.

The Alfalfa Butterfly often continues emerging in the mountains until killing frost - even into early winter. A few adults in the Central Valley may remain aluive until early January, and in droughty years there is effectively no winter hiatus in the flight. 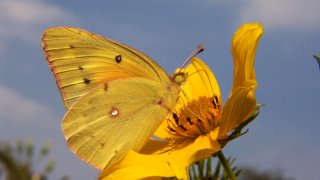 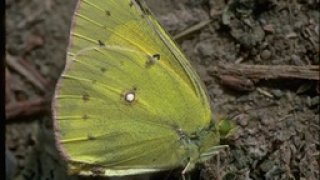 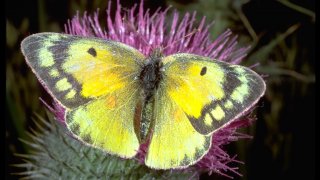 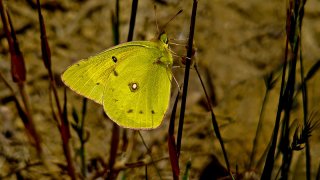