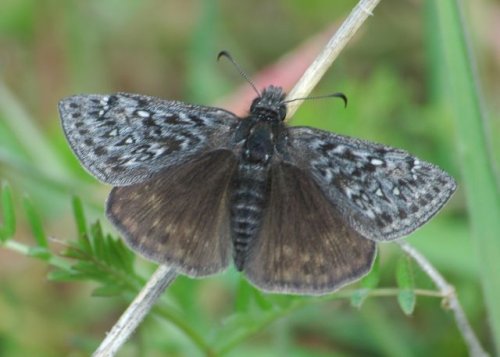 Our commonest and most widespread Erynnis, easily recognized in our area by its large size, brown hindwing fringe, and two light spots near the outer angle of the hindwing beneath. It occurs from sea level to 9000', though the individuals seen above 7000' seem to be hilltopping fly-ups and there is no evidence of breeding up there (in fact, there are often no hosts). An avid puddler, often in large numbers, it occurs in woodlands and forests but is very nearly gone from the Central Valley.

In theory this is a single-brooded species (February to July, depending on site), but at Gates Canyon it has repeatedly produced a partial second brood in mid-to-late summer. Second-brood individuals are subtly different in phenotype from firsts. The same is true of the related Eastern species E. horatius, which also produces one or more summer broods.

Larvae live in rolled-leaf nests on a variety of tree Oaks, both deciduous and evergreen. I have not found them using exotic species in cities or parks-at least not yet. 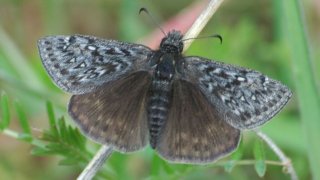