This is a "complex" of several biological entities which may be "good species;" we have much to learn. All the populations along our transect are in the Sierra Nevada and are associated with Sulphur Flower, Eriogonum umbellatum - which itself may be more than one species! The butterflies are always single-brooded and emerge when their hosts (which are their principal, if not sole nectar sources) are in bloom, generally in late spring-early summer. Males are avid puddlers. The alpine population on Castle Peak, included in battoides for purposes of this transect, has been considered a separate species, Euphilotes ancilla pseudointermedia. It cannot readily be distinguished from E. battoides intermedia without examining the genitalia. A fascinating evolutionary puzzle, but you enter the taxonomy at your peril! 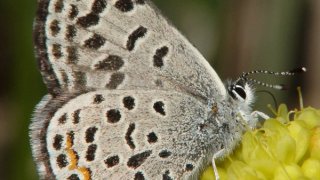 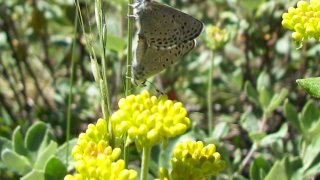