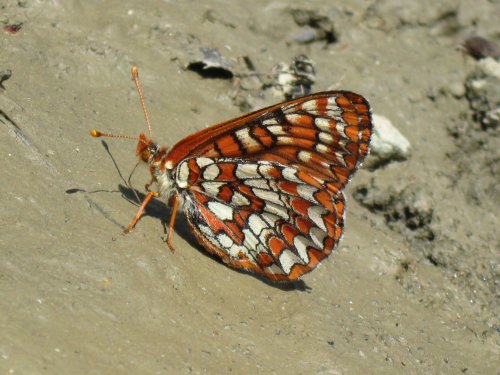 This colonial species is divided into numerous taxonomic subspecies. Since none of our populations belongs to a legally-protected subspecies, we will ignore the trinomials here. Much more local than E. chalcedona, usually flying earlier, and in our area easily told from it by the rounded wings, reduced black above, lack of white spots on abdomen, and partly-black antennal club. Many populations occur on serpentine. On our transect the only population west of the Sierran crest is at Washington. There are numerous populations nearby, as at Iowa Hill Road (Colfax) or Dutch Flat Powerhouse Road. There is an unusual population on top of Grouse Ridge, colored like the very small alpine subspecies nubigena but almost as large as foothill animals. This may be the source of the strays occasionally found hilltopping on Castle or Basin Peak--or there may be other mountaintop populations undiscovered nearby. There is a population at Sierra Valley on the lava flow. Males puddle; both sexes visit a variety of mostly low flowers but will rise to Yerba Santa, milkweeds, and even (rarely) Coffeeberry! It is insanely devoted to the flowers of the odd yellow Composite Chaenactis glabriuscula, often visiting no other yellow Comps. One brood, March-June, the flight season varying from year to year at a given site in response to weather. The part-grown larvae diapause and can carry over to a second year in the event of drought. The host in the western Sierran foothills is generally Collinsia (Chinese Houses) and at Sierraville, a small Orthocarpus (Owl's Clover) (both Scrophulariaceae). A variety of Scrophs and Plantaginaceae may be used in different sites, even close by. 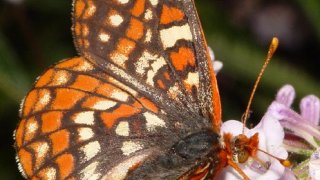 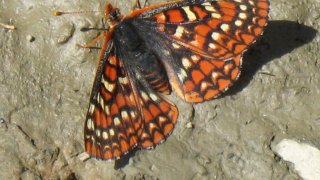 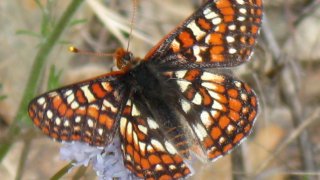 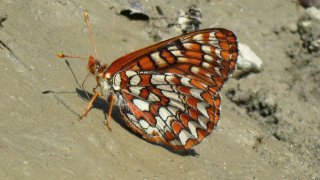