Like many Central Valley butterflies, this has been accused of being an introduction from somewhere else--but there is no good reason for thinking that it is. (We have done the molecular genetics which, alas, is uninformative.) The fact that it occurs widely and happily in disturbed habitats (in this case, annual grassland, riparian habitats and tule marsh) and often uses naturalized host plants contributes to the notion. It rarely turns up above 2000' and in our area is almost never sympatric with the Western Tailed Blue. Even at Lang Crossing, where the Western Tailed Blue is native and permanent and the Eastern a short-term colonist, they did not occur in the same spot.

The spring brood is more richly colored, especially in the female (which may be mostly blue above--summer females may be all black). This butterfly flies low, in the grass or among its host plants. It is strongly multiple-brooded, flying in the Central Valley from March to October (and rarely recorded as early as January!), and usually undergoing a "seasonal succession" of host plants as each passes through its life cycle and becomes available or unavailable as the case may be. In many places the first brood or two will be on introduced annual vetches (Vicia). Where native perennial Lathyrus is available, it may be used most of the season. Summer broods are often on Spanish Lotus (Lotus purshianus) and similar annual species, often shared with the Acmon Blue and Gray Hairstreak. In some places this butterfly may breed all seaason on the naturalized perrennial Bird's-Foot Trefoil (Lotus corniculatus). Other hosts include Sweet Clovers (Melilotus) and Clovers (Trifolium). Adults are avid flower visitors - generally to small, low things like Lippia, Heliotrope and Clovers. 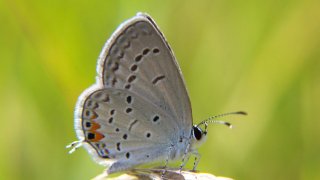 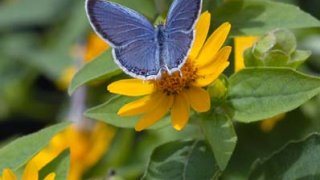 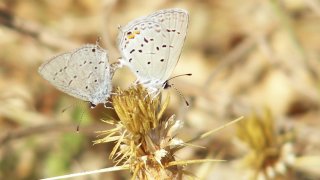