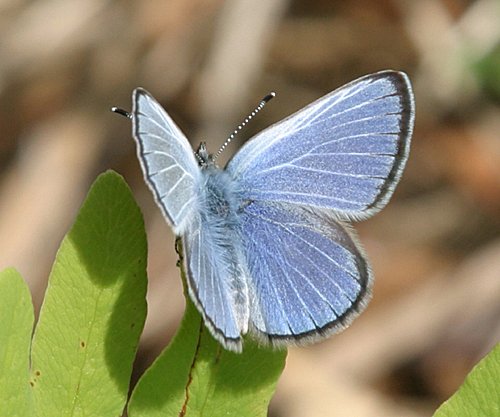 A common, single-brooded Legume feeder found from sea level (where it flies in March and April) to above tree-line (early summer). There is plenty of variability, especially in the size of the black spots beneath (smaller in colder climates) and in the amount of blue on females above (none to a lot). Local populations tend to specialize on particular host plants. In the Central Valley and lower foothills occurs an "ecotype," or ecological race, adapted to naturalized annual Vetches much used on highway embankments. The native host plant in much of the Valley appears to have been the perennial sweet-pea, Lathyrus jepsonii and var. californicus. Most foothill and montane populations use perennial species of Lupinus. This butterfly often flies together with the Icarioides Blue (Boisduval's Blue) and the Arrowhead Blue. All of them are about the same size and color and are lupine-associated. Valley populations feeding on Vetch tend to fluctuate wildly in abundance, perhaps reflecting the weather during critical periods in the life history. It's an odd fact that this species, which spans the continent, developed an "ecotype" feeding on introduced annual vetches in the Northeastern U.S. about the same time it did so here.

Male Silvery Blues are enthusiastic puddlers, sometimes by the hundreds. They also visit flowers, especially Fiddleneck. This species is very tolerant of close approach and is very easy to photograph when mating. 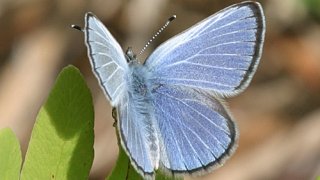 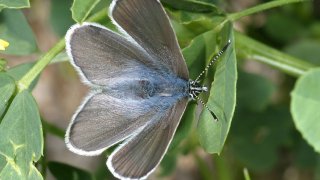 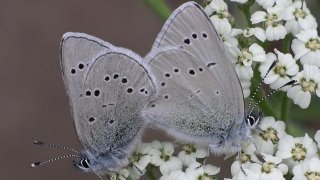