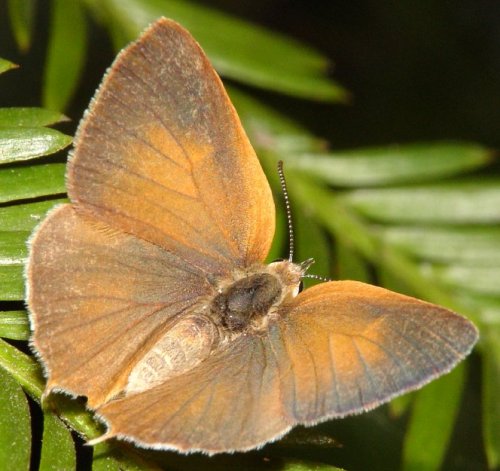 A very strange species, often common to abundant (but occasionally rare) and demonstrably long-lived, yet not known to visit flowers (or anything else resembling a food source) at all. It has a very short proboscis. There is a single brood, emerging in late spring to early summer, estivating in cool, shaded locations on the forest floor (e.g. inside bramble tangles), then re-emerging in autumn to breed - how do they do it? The adults are active in late afternoon and on into dusk, flying around the host tree. When they are perched in the tree they look exactly like dead leaves, and disappear. One can sometimes flush incredible numbers by agitating the tree or throwing a rock through it. There is little variation - but then, there isn't much pattern there to vary.

Despite its apparent adaptation to the droughty Mediterranean summer and the fact that there is a sister-species confined to Baja California (H. poodyi), the historic roots of this butterfly apparently lie in the Old World, where all the closely-related genera are.

The host is Canyon Live Oak (Goldencup Oak, Golden Oak, Maul Oak), Quercus chrysolepis. This oak hybridizes with the shrubby high-altitude Huckleberry Oak (Q. vacciniifolia) and the hairstreak also breeds on the hybrids (as at Lang Crossing, and in the Trinity Alps), but has not been found on Q. vacciniifolia itself. There are reports of it breeding on Chinquapin (Chrysolepis) and Tan Oak (Tanbark Oak) (Lithocarpus) as well, but not on any other species of Oak, and not at any of our sites.

H. grunus can be very common in the Coast Range where its host occurs, which it does not at Gates Canyon. 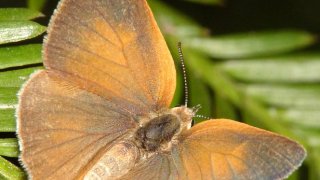 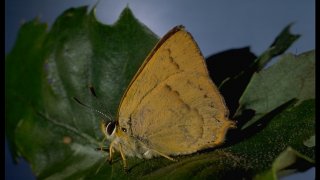