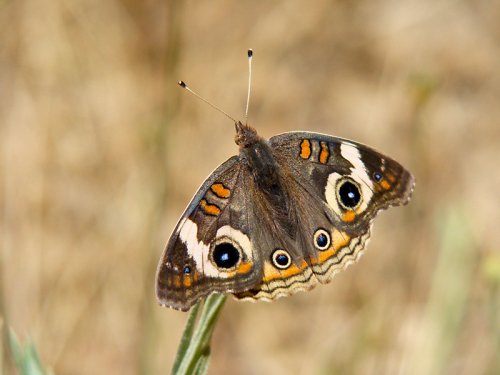 The Buckeye occurs at all our sites but is non-resident above 5000'. At Lang it has overwintered successfully, but clearly not every year. It is not certain that it ever overwinters at Sierra Valley. In some years, e.g. 2005, there are massive waves of immigrants in early summer. We do not know where they come from. In such years the peak density may be reached in midsummer, as Buckeye reproduction temporarily outstrips the capacity of natural enemies to control the population. The Buckeye breeds continuously in warm weather. Usually the population peaks in autumn. At that time females become very dispersive, blanketing the landscape with eggs. If overwinter survival is a sort of lottery, local "winners"-distributed sporadically-will be the foci from which the population will re-expand in spring to reoccupy the entire area. Evidence of local breeding on the floor of the Sacramento Valley often begins in late May or June. Overwinter survival is consistently better in the foothills than in the Valley. The great freeze of December 1990 extirpated this butterfly from our entire area, but it recolonized within a year.

In August, September and October the Buckeye produces a distinctive phenotype, "rosa," with a deep red or reddish-purple color on the hindwing beneath. This is particularly striking in females. Although photoperiod has been implicated, it is clearly not the whole story since the "rosa" phenotype is never produced in spring. Late-autumn and early spring individuals are usually very small and plain clay-colored beneath.

The Buckeye breeds on plants containing bitter iridoid glycosides, including plantains (Plantago, especially P. lanceolata), various Scrophulariaceae (especially Fluellin, Kickxia), and Lippia (Lippia or Phyla nodiflora). The spiny, black-and-white caterpillar has a bright orange head. Its behavior suggests its diet makes it virtually immune to vertebrate predation, but the pupa and adult are quite edible.

Male Buckeyes are territorial perchers, usually on bare ground. Both sexes visit a great variety of flowers, from Heliotrope and Lippia to California Buckeye and Rabbitbrush! They often swarm over Coyotebrush (Baccharis) in autumn, especially the male plants.

This is a species of open country, rarely entering the woods and then only along roads or streams.

The Buckeye has been used for developmental- biology studies of wing pattern determination. It is subject to often striking aberrations, some of which have been collected in our area. The most frequent of these has the white wing-band above obscured by brown scales, more or less resembling some subtropical and tropical Buckeye relatives. This phenotype formerly occurred rather often at Suisun, but has not been seen since the 1990 extinction. 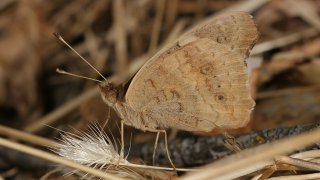 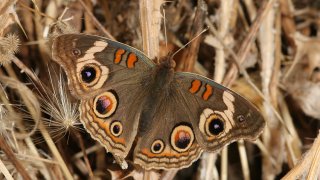 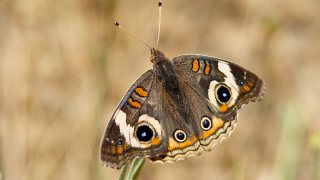