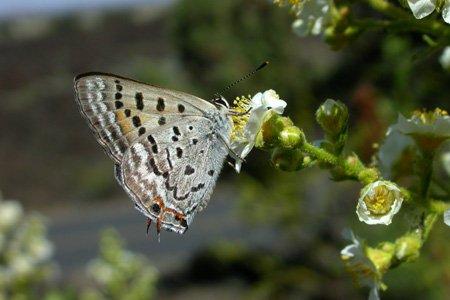 Most populations of this strongly sexually-dimorphic species live in mesic habitats, usually mixed forest. Uncharacteristically for a Copper, territorial males perch in sunflecks often high in the trees. Both sexes visit flowers eagerly, especially those of Eriogonum nudum and Asters (and in Sierra Valley, alfalfa and yellow Ivesia). The nominate subspecies, which occurs at Gates Canyon, Washington, Lang and Donner (and has been taken low at Castle Peak), is more heavily marked and shaded than the "desert" subspecies, virginiensis. The Sierra Valley population, formerly arota arota, apparently died out and was replaced by a more virginiensis-looking population, which in turn was unrecorded in 2005. The host plants are Currants and Gooseberries, genus Ribes. There is one brood, at low elevations rarely as early as May, mostly June-July; at Lang and Donner July-September. The Gates Canyon population seems to be a relatively recent colonization, and is the only one recorded for Solano County. The species is uncommon there , at Washington and Lang, but usually common at Donner. It has the (?) unique habit of taking nectar from Penstemon flowers bitten into by nectar-robbing carpenter bees (Xylocopa). 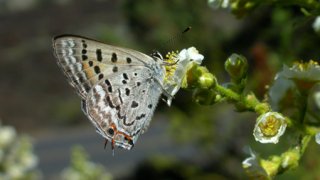 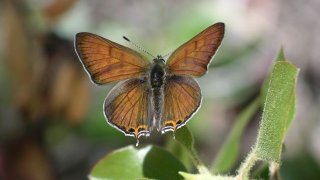