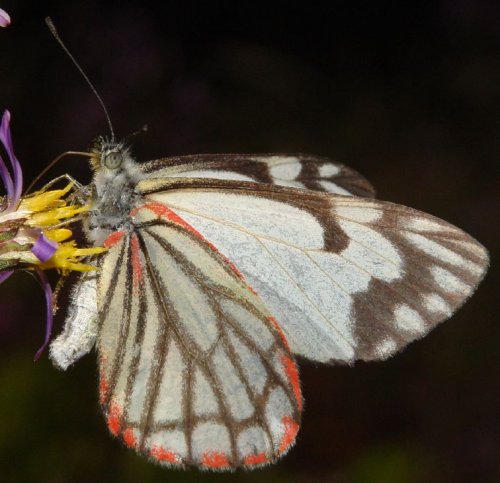 The Pine White is only very distantly related to our other Whites; its roots lie in both the Old and New World Tropics, and it is apparently descended from mistletoe-feeding ancestors. Perhaps it "got onto" pines by way of the pine mistletoes, genus Arceuthobium? At any rate, it occurs in pine forests from the upper foothills to the subalpine and on both slopes of the Sierra, and in the Coast Range north of the Bay. Adults "lek" (a type of mate-locating behavior) by spiraling around the upper parts of pine trees. Some populations undergo periodic outbreaks, when the number of white butterflies may resemble a snowstorm. I have seen this only once myself in our area.

The eggs, which overwinter, are laid in neat rows on pine needles, and the larvae blow around on threads of silk (a behavior called "ballooning"). The hosts are 2- and 3-needle pines, minly Yellow Pine (P. ponderosa) and Jeffrey Pine (P. jeffreyi). There are records on Douglas Fir, but it is not clear if eggs are laid on this tree or larvae merely balloon to it.

There is only one brood, as early as June at 2000' and as late as October at 7000.' There is quite a bit of local variation in color, pattern and even wing shape. The adults visit flowers such as Aster, Goldenrod, Rabbitbrush and Thistles, but seem to be content to fly in places where nothing at all is in bloom. This butterfly rarely flaps its wings and is one of the easiest to catch by hand when feeding. 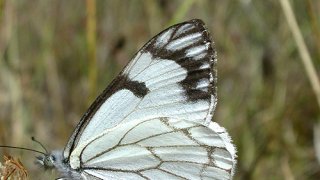 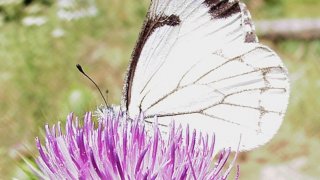 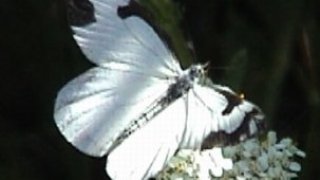 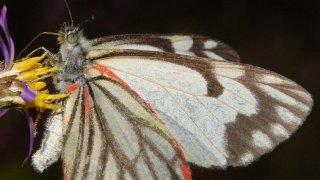 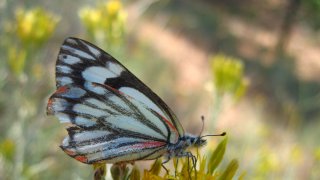