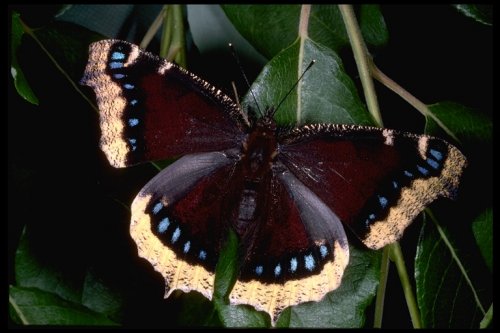 A very distinctive and charismatic butterfly, best known for its conspicuous activity in late winter, flying and acting territorial before any trees have leafed out or any wildflowers are active. It hibernates as an adult. In the Sacramento Valley there appears to be only one brood (in spring); the resulting adults migrate upslope and breed in the mountains. There is a reverse downslope migration by the next generation, in late September-October. It is not obvious why this seasonal altitudinal migration occurs, but both the California and Milbert's Tortoiseshells, its closest relatives, do it too.

The eggs are laid in clusters and the spiny black larvae, marked dorsally with red, feed communally in the open on Willows (many species, including cultivated Weeping Willow, S. babylonica) and occasionally on Hackberry (Celtis) or Elm (Ulmus) in cultivation. The pupae are grayish-violet, finely dotted with black, and tend to be formed as clusters.

There is a very dramatic aberration, named "hygiaea," in which the yellow border expands to obliterate the blue spots and cover the entire outer 40% or so of the wings. It has been taken or seen a few times in our area, most recently in Rancho Cordova in 2006.

In recent years populations of this butterfly have collapsed regionally; it disappeared from West Sacramento for several years and has been very scarce and erratic at other low-altitude sites; there was some improvement in 2005 and numbers of hibernators at low altitude were up in 2006, but very bad weather may have prevented much if any recovery.

Adults are more likely to visit sap, injured fruit, dung or mud than flowers, though spring indivuals often nectar at Willow catkins and autumn ones tank up at Rabbitbrush. In autumn one often sees adults "hanging out" within willow trees in the high country. It is not obvious what they are doing and why. Some adults overwinter even at Donner. They emerge just after snowmelt, which often coincides (late May-June) with when immigrants from the new brood arrive there from downslope! 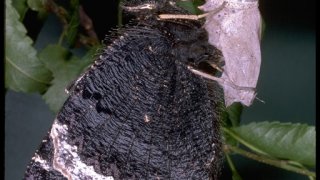 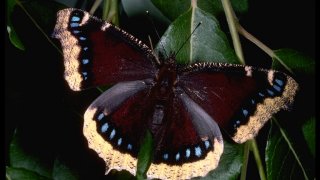 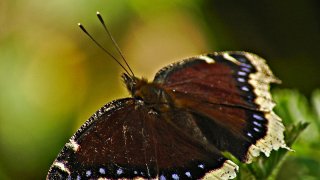