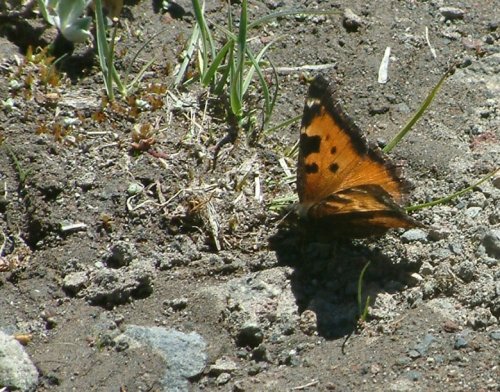 Along with the Painted Lady, this is a mass migrant that makes news at irregular intervals by tying up traffic! The "Tortie" overwinters as an adult and can sometimes be seen sunning itself in midwinter on mild days. It is generally common in foothill canyons in late winter, ovipositing on the young, tender growth of various species of Wild Lilac (Ceanothus). The spiny, black-marked-with-yellow larvae feed gregariously, without a web, and in big years can defoliate whole stands of the plants. They often pupate on the bare, leafless stems en masse, the grayish-violet pupae looking like some strange kind of leaf and twitching in unison when disturbed. Adults emerge in late May to early June and almost immediately emigrate, going north or east and upslope. Breeding localities in summer vary widely from year to year - sometimes in the high southern Sierra, sometimes in the Cascades... sometimes only in far northeastern California or even farther north. The migrant females lay on the tender growth of high-altitude Ceanothus such as Tobaccobrush and Snowbrush, which again may be defoliated. Adults emerge in late July and migrate to estivating grounds, generally above tree-line. These are often in the high country of Yosemite, Sequoia and Kings Canyon National Parks, but can even be in the Trinity Alps, South Cascades, or (as in 2005) on Mount Rose! Estivating Torties do little but "hang out," and many high-altitude hikers have described their encounters with millions of them in mystical terms (they often identify them as Monarchs!). In late September these butterflies scatter downslope to hibernate in the foothills--they are the late-winter butterflies of the new year. Estivators-hibernators thus may live 9 or 10 months as adults.

Although the rhythm of seasonal migration is constant, the numbers of individuals vary over several orders of magnitude - but not in an orderly "cycle." Records at Gates Canyon, in the Inner Coast Range, are virtually all of hibernators and their offspring just before emigration; the species is totally absent from July through late September or October. Records on the floor of the Sacramento Valley are of migrants away from the Coast Range (May-June) or back to it (late September-early October). Very rarely an individual may overwinter on the Valley floor and reappear near its wintering site on fine days. Some individuals do hibernate at higher altitudes, and show up right after snowmelt - but this frequently coincides with the arrival of masses of upslope migrants in June.

Occasionally the upslope movement encounters the retreating snowline, forcing females to lay only on Ceanothus that have melted out. This can result in enormous larval densities, total defoliation of the hosts and mass starvation -- while close at hand, plants that were still under snow when the eggs were laid sit absolutely untouched!

Adults visit flowers of many kinds, aphid and scale honeydew, damaged fruit, sap--and mud: a mud puddle in a mass migration of Torties is a memorable sight, often with hundreds or thousands packed side-by-side on the damp surface.

Sexual dimorphism is minimal, and remarkably little variation occurs in the wild although (as is usual for Nymphalini) bizarre aberrations can be induced by cold-shocking the pupae in the lab.

The California Tortoiseshell is closely related to two Old World species which, unlike it, are rare and in serious decline. 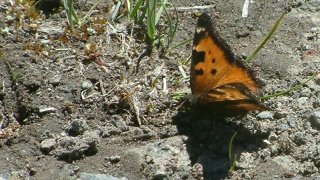 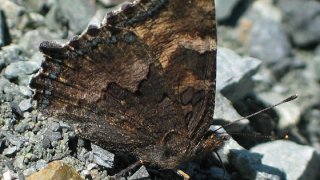 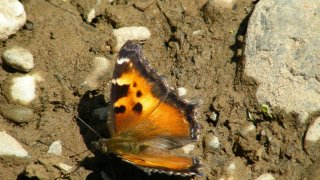 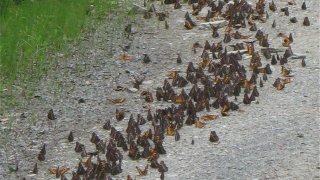