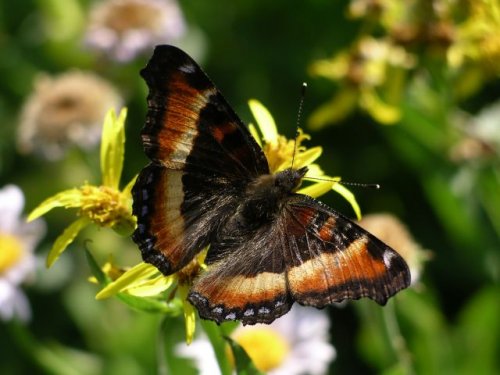 Recorded from most sites on the transect, but this is an altitudinal migrant that spends the winter as an adult near sea level, breeds there in spring, then shifts to the Sierra (particularly the East slope) for summer breeding before returning west in autumn. Fresh adults are often common on Coyotemint at tree-line on Castle Peak, even though there are no host plants that high. They were apparently born and bred on stinging nettle (Urtica holosericea) around Truckee and Loyalton! As a riparian plant, nettle should be available all summer at low elevation so it is unclear why this species undergoes its annual trek up and down the Sierra Nevada - but it does. Larval colonies have been found on the Sacramento Valley floor in places where adults have never been seen; it has been found breeding in West Sacramento and North Sacramento and occasionally uses the small introduced nettle, Urtica urens, as well as the large native species. The eggs are laid in masses, and the black-and-yellow spiny larvae are colonial and quite conspicuous.

Adults are most likely to be recorded near sea level in late winter, less often in autumn. In the Sierra they can be seen from May to September. There are probably two generations a year, possibly three. In addition to Coyotemint they are partial to Rabbitbrush and, oddly, they often visit flowers of Bitter Cherry and Choke Cherry, not usually visited by butterflies. There is no significant variation. 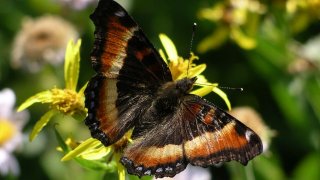