This is the signature butterfly of the alpine zone in the Sierra Nevada. Castle and Basin Peaks are near its northern limit, which appears to be Mount Lola, a few miles farther north. The Ivallda Arctic is extremely cryptic at rest on the ground; if startled it flies briefly, then lands again and disappears. The male has a rather pointed forewing amnd a greenish stigma in the middle of the wing. The female is larger, with more rounded wings and usually two large eyespots; it lacks the stigma. A few strays have been recorded near the east end of Donner Pass, but the species does not breed there.

The genus Oeneis, which is circumboreal, typically has a two-year life cycle, diapausing twice as a larva. Farther south most populations are synchronized to fly in alternate years only. It is difficult to envision the biological significance of this, or the mechanisms that enforce the synchronization - given variation in the alpine climate. At Castle Peak, however, the Ivallda Arctic flies in both odd and even years. Molecular-genetic studies show that there are differences between the odd- and even-year butterflies; it thus seems that there are two sympatric two-year populations there, not one one-year one! Our populations are uniformly clay-colored, but beginning on the south side of Carson Pass there is a rapid transition to the buitterscotch-colored form which has been called Oeneis chryxus stanislaus. Molecular studies indicate that the two color forms are in fact conspecific.

The Ivallda Arctic hilltops on rocky knobs. It seldom visits flowers, but has been recorded at Sulphur Flower and the mat-forming Composite Railardella argentea. The larval hosts are undetermined grasses or sedges. 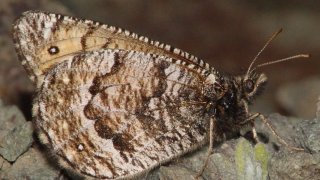