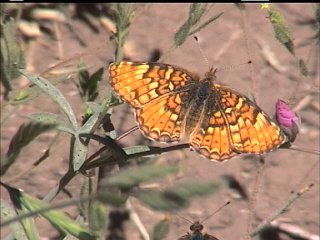 The Sierra Nevada subspecies, herlani, of the California Crescent is uncommon and spottily distributed, but its lack of highly visible distinguishing characteristics may result in it being seriously underreported. It almost always co-occurs with the much commoner Mylitta (P. mylitta) and Montana (P. campestris montana) Crescents and can be described as averaging slightly larger than either, with a wing pattern that in detail matches a heavily marked Mylitta, but with the outer half of the wings above (especially the hindwing) with the pattern more or less suppressed as in Montana. I am not sure if I have seen more real herlani misidentified as something else, or the reverse! Along our transect it breeds at Donner, but is never common.

The other subspecies, P. orseis orseis, looks like a very heavily marked Mylitta colored like a P. campestris campestris, and usually co-occurs with both. It is just possible that both subspecies represent stabilized hybrid populations between their respective congeners. However, the two - Mylitta and Campestris - are broadly sympatric elsewhere and have never been known to hybridize.

Herlani occurs along trails or roads through conifer forest, and in clearings or glades, often sitting on or near the ground. It is single-brooded, flying usually in June-July. The larval host plants are Thistles (genus Cirsium), both native and introduced (as in Mylitta). 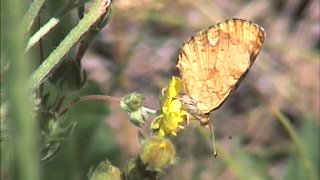 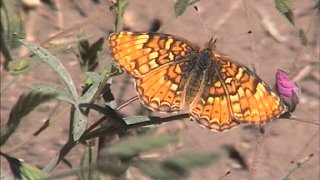