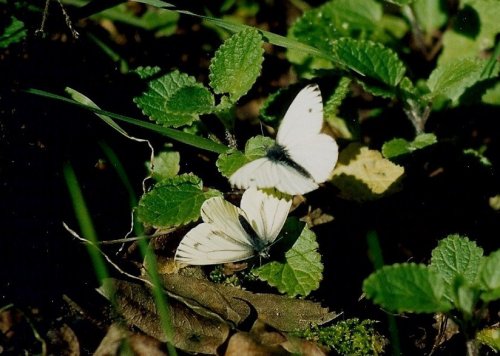 A characteristic species of moist mesic forest in late winter and early spring, apparently not breeding above 5000'. It flies in dappled light and shade, often high off the ground, with rather infrequent wingbeats compared to P. rapae. In the gloom its brilliant white color often makes it look bigger than it is. This species has a very dramatic seasonal polyphenism: first-brood specimens have more or less bold, black vein-lines on the hindwing beneath, while second-brood ones (where they occur) are usually immaculate white (or pale yellowish). Not all populations produce a second brood in nature, but all can be induced to do so in the lab by rearing under continuous light. At Gates Canyon there has been a rudimentary third brood on a couple of occasions.

Gates Canyon animals often look quite a bit like those from near the coast (subspecies venosa) but geographically all our populations are subspecies microstriata, originally described from the Coast Range inland from the fog belt. Sierran specimens are usually the lightest-marked.

The host plants are Milkmaids or Crinkleroot (Dentaria, now usually put in Cardamine) and the native Yellow Rocket or Wintercress (Barbarea) (there is an introduced Barbarea that occurs in moist meadows in the North Coast Range-the wrong habitat). The second brood, however, is usually developed on naturalized Watercress (Rorippa nasturtium-aquaticum) in slow streams, and it is unclear if a second brood was even possible before this plant arrived on the scene. The eggs are large and laid singly, usually on the undersides of leaves; the downy green larvae eat leaves. The pupa is either wood-brown or apple-green, marked with black. At Gates Canyon the flight season is February-April; second brood (optional) in May-June; rare third in August. At Washington, March-June; Lang, mainly April-June. The Gray-Veined White is part of a very complicated set of closely-related entities found completely around the Northern Hemisphere in cool, moist environments. The limits of genetic species are not yet well-established, but it is unlikely that our animals are conspecific with "true napi" from Europe. Thus their correct scientific name is in doubt. 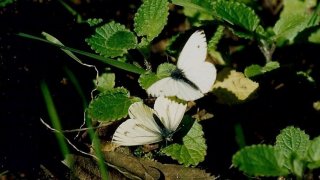 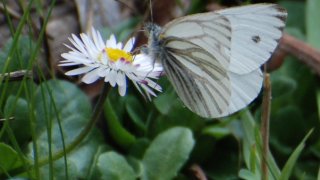 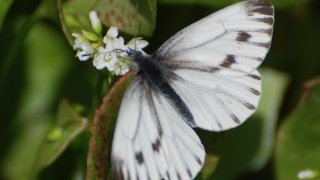 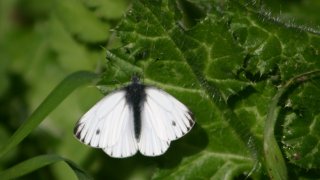 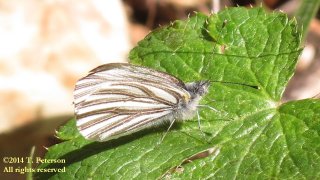