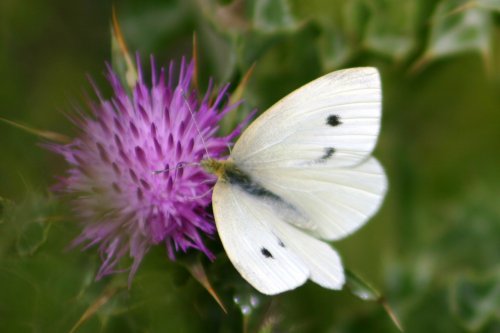 Our only introduced butterfly - from the Old World - this is also one of our weediest, occurring in disturbed habitats from sea level to about 8000'. It even invades riparian woodland and montane coniferous forest habitats in summer. We are not certain how or when it reached our area. We know the species was introduced in southern Canada in the 1850s; the great Lepidopterist Samuel H. Scudder traced its spread, but was unable to resolve the history on the West Coast. It was not in San Francisco in the early 1880s, but was abundant by the time of the earthquake (1906). There is a mysterious specimen sent by the early collector Lorquin to Tryon Reakirt in Philadelphia, which may have been collected at Yreka in Gold Rush days. Was there an early introduction by the Spanish during the Mission Period?

This is a strongly multivoltine butterfly, flying on average 44 weeks of the year in the Davis-Sacramento area. It is unclear that it can overwinter at all above 5000'; it seems to recolonize from below every year in June, and large, bright summer-phenotype specimens can be seen invading Donner before the snow is done melting. Adults from diapaused pupae are typically small, with reduced black markings above but enhanced black at the wing bases, and the ventral hindwing heavily infuscated with gray. This phenotype is almost never seen at Donner. Oddly, the Cabbage Butterfly also seems unable to persist anywhere where it can get in only one generation a year.

In a typical year, after overwinter mortality, numbers of this species rise rapidly to a peak in late spring, exploiting almost unlimited quantities of host plants (weedy mustards). Then all the annual hosts (Brassica and Raphanus) die off by the 4th of July, and the butterfly is forced to contract down to local pockets of hosts that remain green in summer - cultivated Crucifers and Nasturtiums, the perennial mustard Hirschfeldia incana, and the aggressive weed Tall White-Top or Perennial Peppergrass, Lepidium latifolium. This last plant has invaded the western Great Basin, producing virtual monocultures along the truckee River and other watercourses, and spreading the butterfly into areas where it had been rare or absent not so long ago.

Host plants are all producers of mustard oils (glucosinolates), which are known oviposition and feeding stimulants. They include a great variety of Brassicaceae, native and introduced, wild and cultivated, as well as garden nasturtium (Tropaeolum). Some Brassicaceous genera which are NOT used include Thlaspi, Capsella, Erysimum and Lunaria. At Sierra Valley most breeding seems to be on Horseradish (Armoracia rusticana), escaped from cultivation and persisting.

Adults visit a great variety of flowers. They are one of only two species of butterflies able to extract nectar from the flimsy flowers of Epilobium brachycarpum (Onagraceae). The other is the Woodland Skipper, Ochlodes sylvanoides. Both do it by hanging upside-down.

For over 30 years I have offered a pitcher of beer to the person bringing in the first Cabbage White of the year in the Davis-Sacramento area. The first-flight dates have varied from Jan.1 (when the autumn brood isn't quite done yet!) to Feb.26. Almost every year someone brings one in in May or June and asks "Did I win?" 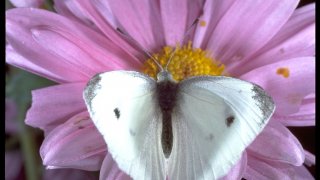 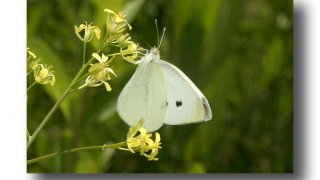 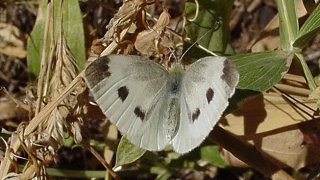 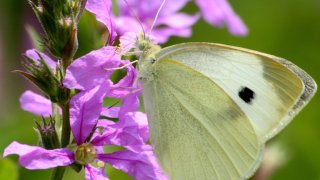 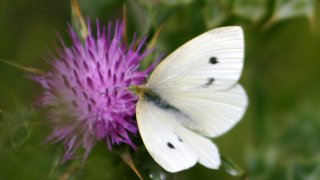