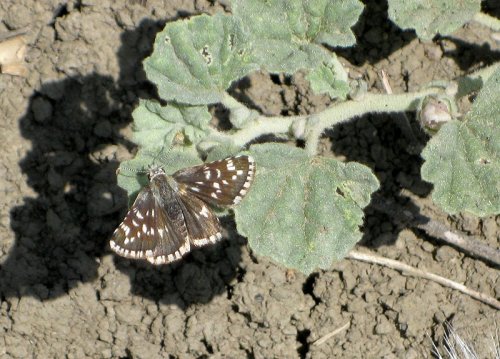 Local but sometimes common with its host plant in the Central Valley and Delta, generally on compacted alkaline clay soils. The Small Checkered Skipper has a "busy" flight just above the ground like a bee. The first brood is phenotypically very similar to the Two-Banded Skipper (with which it never co-occurs), but summer broods are smaller and very dark above, with the white markings reduced to tiny spots. Males fly along roadsides and if perching, sit at ground level.

Multiple-brooded, March through October, though in drought years it can enter diapause early and skip late-season breeding. Usually it is commonest in autumn, however. The only host plant in our area is Alkali Mallow, Malvella leprosa (formerly known as Sida hederacea!), a very long-lived perennial forming large colonies, with gray-felted, fluted foliage and creamy white flowers. This plant also occurs disjunctly in similar habitats in Mexico and in Argentina - in both places it has lemon-yellow flowers - and in eastern Argentine Patagonia another species of Checkered Skipper, not closely related to ours, specializes on it and is hardly distinguishable in color and pattern from P. scriptura. This is a striking case of convergent evolution.

Adults visit flowers with short corolla-tubes and growing near the ground, especially Lippia and Heliotrope.

This butterfly does not seem to be a very good colonizer; many colonies have been stable for decades, and many patches of host plant remain uncolonized although in close proximity to breeding populations. The lack of old collection records has nonetheless led some to speculate that the butterfly was introduced from southern California or the desert Southwest during the 20th Century. 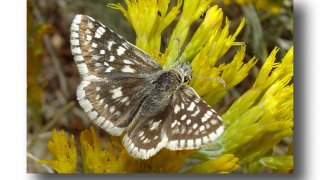 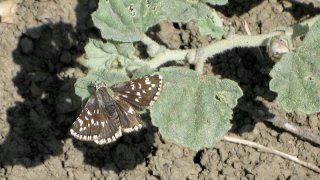