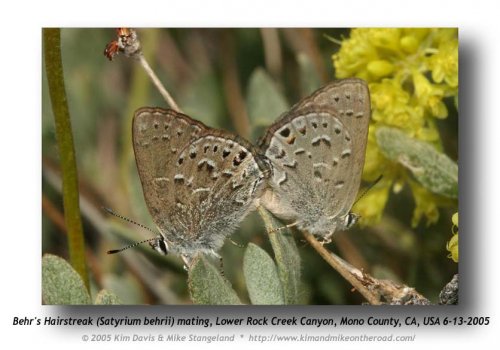 An east-slope species, abundant and breeding at Sierra Valley, straying to Donner (where no hosts are present). It flies in late spring-early summer (May-July) and visits Eriogonum nudum, E. umbellatum, Milkweeds, Alfalfa,Yarrow (Achillea), Yellow Ivesia and other flowers - sometimes in great numbers and often in the company of the Juniper Hairstreak. The host is Bitterbrush or Deer Brush, Purshia tridentata (Rosaceae).

This butterfly is recorded intermittently on Castle Peak at 9000', usually very late in the season (September). There is a matted, prostrate ecotype of Purshia along the ridgeline. The seasonality argues against these butterflies being flyups from below and suggests breeding in situ. We do not know if this is an ongoing, resident population or a case of recurrent short-term colonization. For the record, there is a population of Behr's Hairstreak on a shrub-steppe bench along the Truckee River directly across from downtown Truckee that emerges every year as late or later - even into early October! Its only nectar source at that time is a local (and very showy) late-blooming ecotype of Eriogonum umbellatum. On Castle Peak in September it is very hard to find anything at all in bloom! 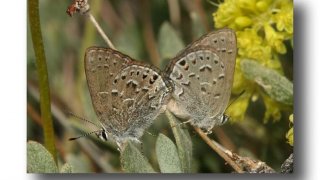 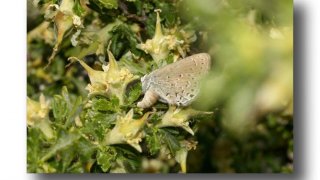