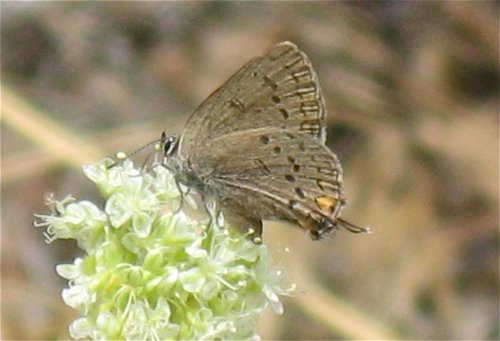 This species has a variety of ecological races, or ecotypes. On the floor of the Sacramento Valley, where it is nearly extinct, it feeds on Valley Oak (Quercus lobata) and visits Hoirehound (Marrubium) and Dogbane (Apocynum cannabinum) flowers almost exclusively. Valley specimens are lustrous and sharply-marked beneath. Foothill ones, which seem to breed on a variety of oaks, average slightly smaller, less lustrous and less sharply-marked; they are usually very abundant and visit California Buckeye very heavily. Montane West-slope populations may breed on Black Oak (Quercus kelloggii) at lower elevations and on Tobacco Brush (Ceanothus velutinus) and perhaps other Ceanothus at Donner. The East-slope ecotype found at Sierra Valley is large, dark, strongly marked and breeds on Mountain-Mahogany (Cercocarpus ledifolius)! It usually shows up on Milkweed flowers, occasionally on Sulphur Flower, Sweet Clover, or Alfalfa. There is one brood, flying near sea level from late April-late June, at Sierra Valley June-July, at Donner (usually) late July-early September. Always overwinters as egg.

This species and the other species of Satyrium partition the day. We do not know where they are early in the morning. They nectar from late morning to mid-afternoon and then become territorial in late afternoon, perching on or near the host plant. 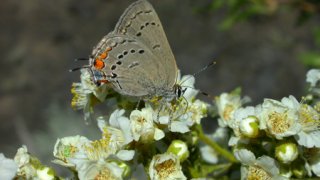 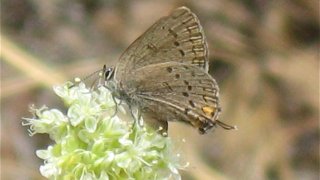 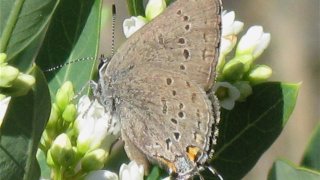