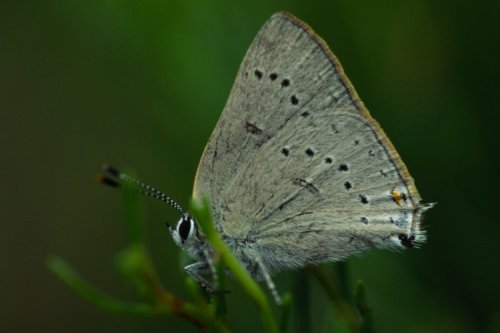 Distributed from sea level to near tree-line, but mysteriously absent from many places where its hosts are abundant. On the other hand, local colonies are very persistent-in some cases seemingly centered on individual trees. This species was incredibly abundant in the Sacramento Valley in the 1970s but is now teetering on the brink of regional extinction for no obvious reason. Its numbers also seem to be decreasing in the mountains.

The Willow Hairstreak is very variable. On the upper surface individuals may have no orange (except for the anal spot) to a great deal. On the under surface the gray color may be matte or lustrous and the black dots may be well-defined and dark (most montane populations) to obsolescent (many Valley ones). There is variation both within and among populations. In the Livermore area and in the western Great Basin this species is tailless and has been considered a separate species, dryope, though it is not known if butterflies from the two areas are "really" the same entity. There are no dryope on our transect, though many Valley animals look like dryope with tails. Dryope occurs as close to us as Carson Valley (Gardnerville and Minden, NV).

One brood, May-July at low elevations, July-September at Donner. Males perch terriotorially on the host plant. An avid visitor to Dogbane, Milkweed, Eriogonums of the nudum group, Yarrow, members of the Apiaceae, etc. As late as the 1980s it was possible to see several hundred Willow Hairstreaks at once on tall Dogbane (Apocynum cannabinum) in the riparian zone in West Sacramento or North Sacramento. Today they are gone completely at West Sac and rare at North. Only a handful of presumed strays have been taken at Rancho Cordova, though willows are superabundant in the jumbled post-dredging gravel landscapes.

Different populations seem to "specialize" on different willow species. Even in the Sacramento Valley, some feed on glabrous, green-leaved willows and others on the gray-pubescent Sandbar Willow. Near Vacaville, including Gates Canyon, the foothill-riparian populations have lustrous undersides and feed on green willows, while the Valley floor ones are matte and use Sandbar Willow. We have much to learn.

This species apparently bred briefly at Castle Peak but is not a regular member of that fauna. 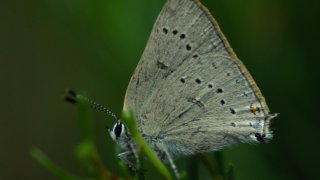 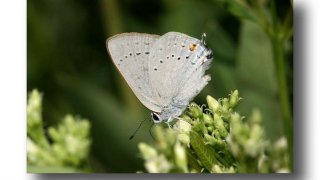 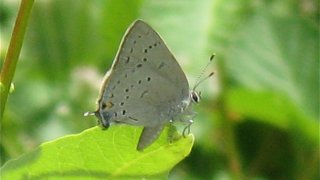