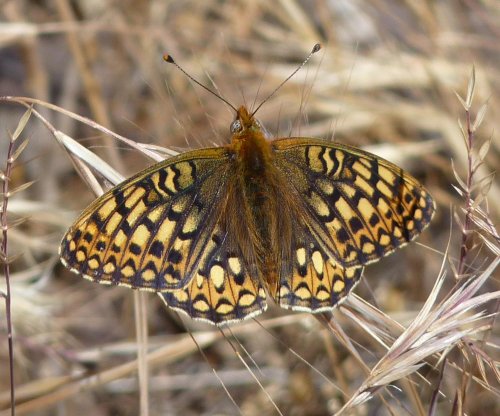 Three subspecies occur on our transect. Speyeria callippe juba is strongly reddish beneath, with varying degrees of silvering. It occurs on the Sierran West slope, at Washington and Lang Crossing, and may be quite common in mesic forest and successional sites, where it visits Pink Dogbane, Giant Hyssop, Yerba Santa, Coyotemint, Wild Buckwheats and other flowers freely. Speyeria callippe nevadensis occurs on the East slope and on our transect is found only at Sierra Valley. It is less reddish above and the strongly-silvered hindwing underside is distinctly greenish; it resembles a small Coronis Fritillary, and flies with that species early in the season. It nectars at milkweeds, thistles, alfalfa, etc. and occurs in meadows and nearby alfalfa fields. The subspecies are separated by the Sierran crest, where the species is absent. Callippe is always the first Frit to emerge - at Washington as early as May, at Lang and Sierraville typically in June-early July - and the first to disappear (by August); the last individuals seen are generally females. Like all Frits, it diapauses as a first-instar larva that has eaten nothing but its eggshell. Since the eggs are laid early in the summer and hatch quickly, the neonate larvae have to endure the heat and drought of summer before facing the winter! The hosts are violets, but as usual the specific preferences are unknown at our sites.

There are a few individual callippe recorded at Gates Canyon, as well as elsewhere in the Inner Coast Range nearby, and even once at Davis (Yolo County) in the Sacramento Valley. These have not been identified to subspecies because the number of individuals is so small, and no breeding populations have been identified nearby that might be sources for them. We suspect there are more populations hidden on private land that has not been collected. 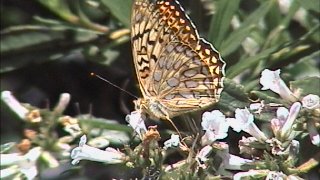 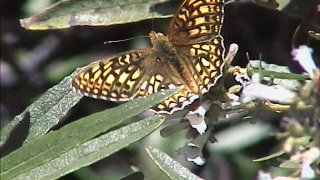 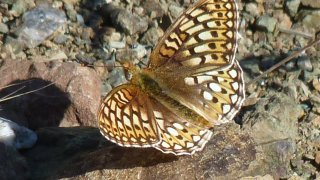 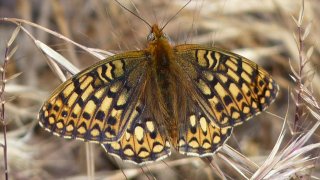