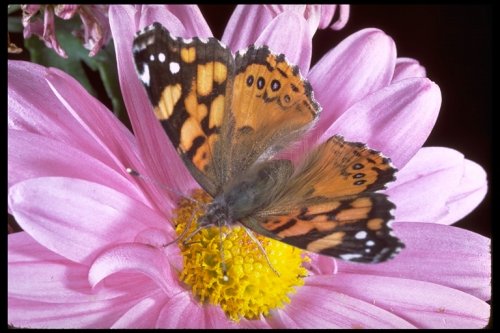 Common at all sites. At low elevations this species is more often seen in cool seasons. Adults "hibernate," but near sea level can be seen sunbathing and being territorial on sunny, mild days all winter long. There is probably some altitudinal migration, but no evidence of latitudinal migration as in V. cardui.

Territorial sites are typically open to the SW or W in very late afternoon, with a defining vertical backdrop (trees, a wall). Males take up positions earlier with low temperatures. Their repertoire of postures is exquisitely tuned for thermoregulation. Experiments demonstrate that territories are only slightly compressible. The "best," or core, territories are occupied first and latecomers are forced into marginal sites. The hierarchy changes daily and within a day, but typically middle-aged males occupy the best territories and males can live a month in summer to four or five months in winter, though most disappear much sooner than that.

An earnest and generalist flower visitor. In winter often seen on flowers of Rosemary, Escallonia and Salpichroa in gardens.

Extreme aberrations are relatively frequent in this species and can be manufactured by cold-shocking young pupae, though the wild-collected ones may in fact have a genetic basis. This phenomenon is known as a phenocopy. Aberrations in Nymphaline butterflies have been studied experimentally for some 130 years! 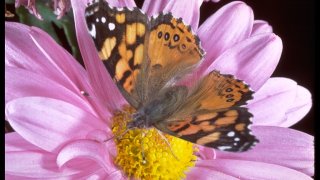 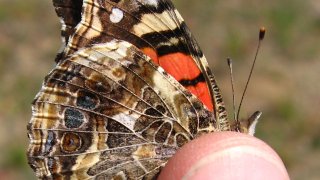