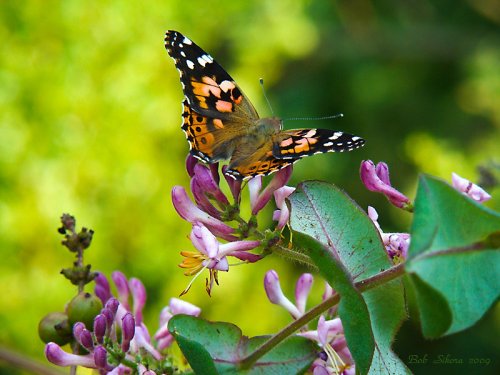 This mass-migrant occurs in much of the Northern Hemisphere. Apparently the entire North American population winters near the US-Mexico border, breeding in the desert after the winter rains generate a crop of annual Malvaceous, Boraginaceous and Asteraceous hosts. The resulting butterflies migrate north. In good years (lots of desert rain) they may do so by billions, interfering with traffic and attracting the attention of the media. 2005 was one of the biggest Painted Lady years in history--perhaps the biggest, but how can we know? At Sacramento at the height of the migration butterflies were passing in one's field of vision at the rate of about 3 per second! 2006, by contrast, was a La Nina year with very little rain in the desert. The butterflies apparently gave up trying to breed there and flew north in February. They tried to breed but mostly were unsuccessful due to bad weather, resulting in only very sporadic individual sightings of their progeny in May. Northward-migrating Painted Ladies are provisioned with yellow fat and are reproductively immature. They do not stop to feed or have sex until they have burned up their reserves, carried over from the caterpillar stage. They fly in a straight line from SE to NW, like "bats out of Hell," and go over obstacles rather than trying to go around them. (On certain days there may be concerted local movements in the wrong direction. We do not understand these.) Painted Ladies tend to fly parallel to the Sierra Nevada, not across it. They enter the Central Valley through the Inyo-Kern lowland or by crossing the Transverse Ranges. They can apparently make it from Bishop to Davis in three days. In some years the migration is heavier in the Great Basin and on the East slope of the Sierra than farther west.

The Painted Lady moves northward in a generational wave as the season progresses. Frequently it disappears altogether from the lowlands in summer. Beginning in August the movement reverses and butterflies head south toward the desert wintering grounds. The southward migration is a more protracted affair, with plenty of adult feeding and some breeding en route. Numbers tend to be highest east of the crest, on Rabbitbrush blossoms in October.

There is a great deal of variation in size and color - desert-bred animals are classically small and pale, while ones from humid areas are large and richly-colored, often with blue pupils in the hindwing eyespots above. Extreme aberrations occur sporadically and are very similar to those seen in the West Coast Lady; they can be induced by chilling of the young pupa.

There is no evidence that this species overwinters successfully anywhere in our area, except for very rare individuals maturing in midwinter from really late autumnal larvae.

Flies January-December, but often rare or absent in summer at low (and sometimes also at high) elevations. Adults visit all kinds of flowers eagerly, including Thistles, Borages, Composites and a host of others. Males hilltop and are territorial lekkers in sites open to the late afternoon sun, with a well-defined vertical backdrop. They share such sites with West Coast Ladies, Red Admirals, and sometimes other Nymphalids.

The usual larval hosts are herbaceous Malvaceae, Boraginaceae and Asteraceae, but in "outbreak" years seen on Fabaceae, Verbenaceae, Plantaginaceae, etc. The larvae may defoliate hosts in an area and then migrate en masse. Each larva lives in a slovenly silk nest, full of frass. The pupa is strongly marked with gold. Throughout the vast range of this species it is recognized as the Thistle Butterfly or Distelfalter. When in outbreak it often feeds on the noxious weed Yellow Star Thistle (Centaurea solstitialis) without, alas, causing it any serious damage! I have known it to destroy garden crops of Comfrey and Borage. 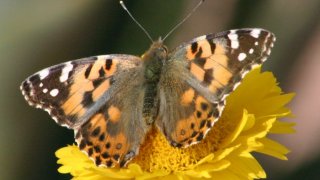 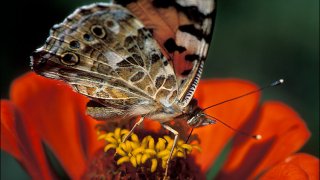 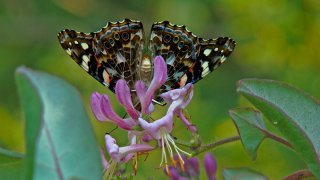 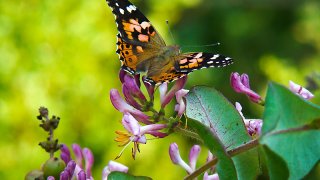