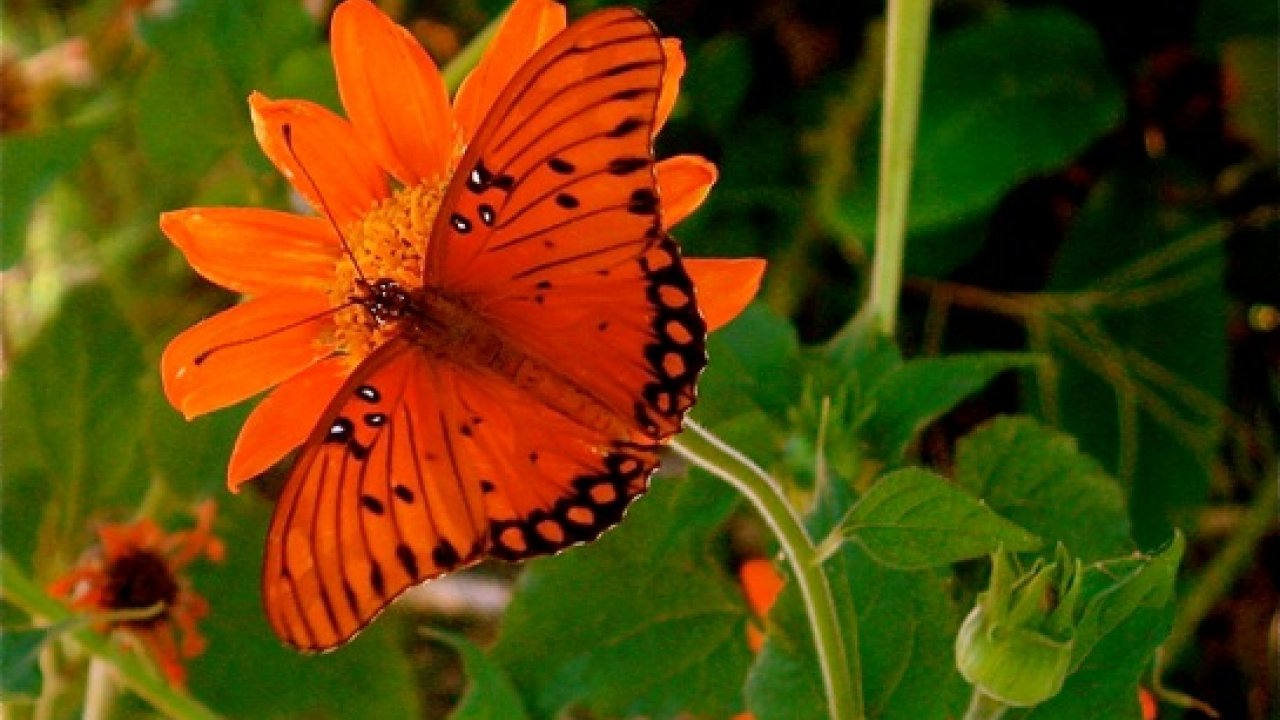 There’s a new butterfly in town in the Sacramento metropolitan area. Well, almost new: it’s back after about 40 years. The Gulf Fritillary has returned, and it’s even breeding in midtown.

The Gulf Fritillary, whose scientific name is Agraulis vanillae, is one of the showiest butterflies in California. It has long, narrow bright orange-red wings with black spots on the upper surface. But it’s the underside that shines: it’s spangled in iridescent silver. Nothing else in the region looks like it. Its wingspan can reach four inches.

This is a tropical and subtropical butterfly, whose range extends from the southern United States all the way to central Argentina. Its spiny orange-and-black caterpillar feeds only on Passionflower leaves, eating many but not all species of the genus Passiflora. There are no native members of this genus in the state of California, but several are widely cultivated in gardens. The butterfly can only breed where there is a "critical mass" of these plants in a town or neighborhood, according to Arthur Shapiro, professor and butterfly expert at the University of California, Davis.

"We don’t know how the Gulf Fritillary got into California," Shapiro explains, "but it was already in the San Diego area by about 1875. The first record in the San Francisco Bay Area was around 1908, but the species does not seem to have become solidly established before the early 1950s, when it was breeding in Berkeley and Hayward. It is still a common sight in the East and parts of the South Bay, and occasionally elsewhere in the Bay Area. It has bred in Fairfield on a few occasions since the 1970s.

Inland, it somehow colonized both South Sacramento and the Winding Way-Auburn Blvd. area and bred for a while in the 1960s, but was apparently extinct or nearly so when Shapiro moved to the area in 1971. "I had one record in Davis and one in North Sacramento in the early 1970s, and then no more," he said. Then, about five years ago, singletons began cropping up in eastern Sacramento County, usually in suburban neighborhoods but also along the American River Parkway. Numbers exploded in late summer 2008, with caterpillars reported in a variety of locations. By October it was confirmed in Folsom, Rancho Cordova, Citrus Heights, Fair Oaks, Carmichael and Arden Arcade and had crossed the county line into Roseville. And then on October 7, 2008 Davis resident Gary Zamzow discovered it at the West Davis Pond—its first spontaneous Davis occurrence in about 30 years. It’s been seen at least once in Davis in 2009.

Then, on August 24 ’09, Shapiro recorded his first Gulf Fritillary in North Sacramento since 1973. The very same day, botanist and Midtown resident Carol Witham caught one in her garden near 37th and J Streets. Shapiro set up an e-mail network among friends in the area, and sightings have been pouring in ever since. (The photograph was taken in Midtown by Stella Levy on September 15.) Shapiro sighted three different individuals along the American River Parkway near Gold River on September 15. This is significant because there are no host plants along the Parkway, so seeing this many in one day there implies significant garden breeding in the nearby neighborhood of Gold River.

The Gulf Fritillary is probably inedible to birds and is easy to approach, photograph, and even capture by hand. Females are larger than males and duller in color above. Adults live for several weeks and breeding occurs year-round. As a tropical species, this butterfly has no true winter dormancy and will be eradicated if the temperature falls to about 22F. It has managed to survive several severe freezes in the Bay Area, but must be regarded as in constant jeopardy of being frozen out of its Central Valley outposts.

Eggs are laid close together and the caterpillars feed more or less communally. They make no effort to hide and are presumably distasteful. They are orange with slate-gray markings and black branching spines. The pupa, or chrysalis, is very long and narrow and hangs upside-down by its tail. It wiggles violently if disturbed. A generation takes 5 or 6 weeks in warm weather. The adults visit Butterfly-Bush, Lantana and other good nectar sources in the garden.

The Gulf Fritillary is one of several species being mass-reared commercially for release at outdoor events like weddings and garden parties. The recent invasion of the Sacramento area may have been triggered by such releases, but we know it came once before when that practice had not been invented yet. It is a harmless and esthetically pleasing addition to the urban and suburban environment, and comes at a time when many of our native butterflies are disappearing.

The Loss of Gates Canyon