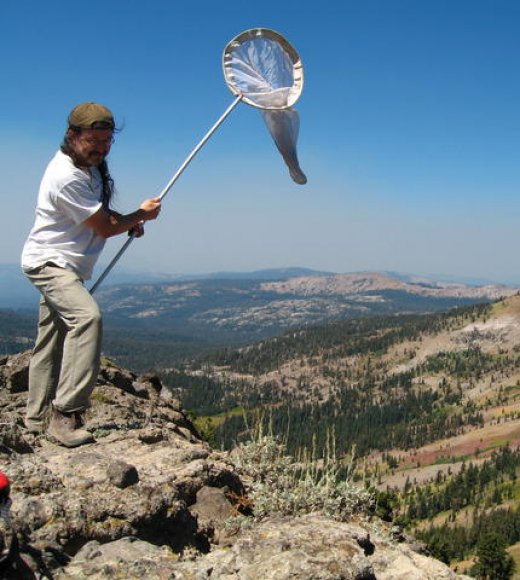 I was born in Boston, MA and grew up on the east coast and in North Africa. Probably the most influential book during childhood was Tolkien’s ‘Lord of the Rings’ series, which my father had the patience to read to me, and then again to my sister. I went to the University of California, Santa Cruz for an undergraduate degree in Environmental Studies, and met Ken Norris, a professor who convinced me I could combine backpacking with getting paid. This seemed a rather preposterous idea, but it actually did work. That led me to go from social activist/radio dj/policy wonk to biological field technician, a career I enjoyed for some 10 years. I worked for most of the federal agencies during that time, got to spend several winters skiing backcountry in the Sierra Nevada, and got to practice guitar and mandolin in remote areas where the only complaints came from irritated squirrels and marmots.

I finally went back for more punishment, first a masters in Geography at UC Santa Barbara, and then a PhD in Ecology at UC Davis, where I met Art and the other members of the butterfly crew. The prospect of rendering to database a 30-year collection of notes on butterflies that was legible only to Russian Code breakers, and kept under high security in a safety deposit box was immediately appealing. A few years later, after filling Storer Hall with the monk-like chanting of latin butterfly names (one would read, the other enter the data), we had the beginnings of the site you see here. The NSF provided funding to complete the rest.

My Post-doctoral work was on modeling the geographic response of plant species to climate change in California with Dr. Lee Hannah from Conservation International. I currently serve as a research scientist at the University of California, Davis, where I work at the Information Center for the Environment.