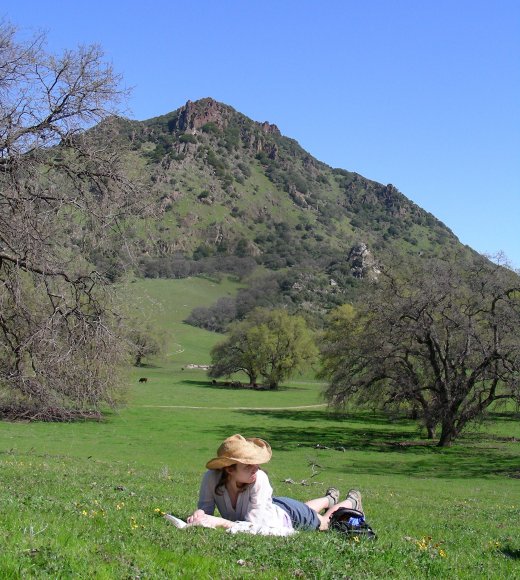 I am broadly interested in community ecology and evolutionary biology, and am very excited to use insect systems to explore these topics. My dissertation research uses myrmecophilous Lycaenid butterflies as a model system in which to explore questions about the evolution and ecology of species interactions. Sometimes this means I get to do some awesome fieldwork, and in the summer of 2012 I traveled to 5 countries in Southeast Asia to search for tiny lycaenid caterpillars. It just doesn't get much better than that.

As a side project, I am also developing a super-cool iPhone app. Part mobile field guide, part education hub, and part data portal this app will use the butterflies of north-central California to engage students and citizen scientists in the outdoor world. I'm working with an incredible team of programmers and web developers to make this app come true, and once it's finished both the app and the source code will be made freely available for all who want to participate.

I completed a Master's degree in biogeography at UC Davis in 2009, for which I analyzed the Shapiro dataset for statistical bias in phenology data. As another side project, I collaborated with fellow Shapiro-ite Elizabeth Long on a project funded by the National Geographic Society to survey the butterflies of the Sutter Buttes, an incredibly beautiful and under-surveyed mountain “range” in the northern Central Valley.

Life before Shapiro lab included a lot of moving around for me. I grew up on the front range of the Rockies in Colorado and have loved science (especially plants and bugs) since i can remember. I majored in Conservation Biology at Prescott College in Arizona, and aside from a brief research internship at the Harvard Forest in Massachusetts, I’ve been in California ever since. I spent a year living in the redwoods outside of Occidental, a tiny town in Sonoma County, where I worked as an environmental educator for innercity youth. From Sonoma I moved to Hollywood, which was obviously a big change after living in a forest with no TV, cell phone service, or paved roads for 18 months. I made the best of it though: I planted a vegetable garden, sold my car, and worked in East LA for an NSF-funded program aimed at helping minority students pursue advanced degrees in environmental science.

I am very excited to be working in the Shapiro lab. In my time at UC Davis I have become involved in science education and mentorship in several ways. I have served as a research mentor for STEM students participating the the Ronald E. McNair Scholars Program on campus. During a summer research position in Uganda in 2007 I volunteered for the Books Open the World Foundation to promote literacy and education among women and girls of rural Uganda (follow links for pictures and a newsletter article describing my work abroad). I have TA-ed several biology and ecology courses, including Biodiversity and the Tree of Life, Ecology and Evolution, and Plant Communities of California. Most recently I've been working with incarcerated males in the county jail in Oakland, CA to teach basic literacy and math. I believe that social change is possible through education, service, and a love of science!