Our populations have been named as a weakly-distinguished subspecies, H. lindseyi eldorado. An uncommon butterfly largely restricted to serpentine grassland, usually in places where there is a big display of Clarkia blossoms in late spring. This species is often sympatric with H. colorado, which it strongly resembles, but both colorado entities (q.v.) in our areea fly later in the year--one of them, much later.

Adults fly low, near the ground, and often sit on bare ground. They are particularly likely to nectar at large yellow Composites like Wyethia and Balsamorhiza, but visit many other flowers too. Flight period May-early July. Larval host plants assumed to be native perennial grasses. 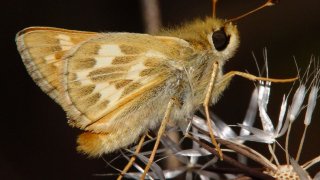